Mystery Mammal part 1, and the Tale of a Tail

Back in my New Years' roundup post, I wrote: 'With the help of a friend, I added to these records two mammal records for my area which were both unexpected and exciting, because they were species I didn’t know were about.  I hope to write about both of them soon!' This post is going to be about the first one.


Last June, I got up one Sunday ready to go to my local patch for my weekly BTO Birdtrack survey, turned on my phone and found a text from a friend of mine. He'd been cycling back from the station late the night before, and had found what he described as a baby deer, dead on the road, and recently judging by the good condition. Being a lot less squeamish than I am, and a cool guy who likes to share stuff (we both find examining dead animals very interesting for naturalist reasons), he picked the deer up and transported it to the entrance of my local patch which was a little way along the road, and left it there under the trees at the entrance. He then sent me a text with the location, and urged me to go and look at it as soon as possible- as I've mentioned, my patch is a very popular dog walking spot, and this was a sunny Sunday, which meant there'd be dogs out in force, dogs who would no doubt be very interested in a dead deer. So I hurried there as quickly as possible, armed with my camera and sketchbook.


Upon arrival, I searched fruitlessly for a while before finding the poor thing. It was indeed small for a deer, and sort of odd-looking to my inexperienced eyes (inexperienced at deer, anyway!). I'd seen Roe Deer before at the patch and thought of them as the only deer in the area, but this deer was definitely too small. As my friend had called it a baby deer I was still working on the assumption that this was what it was, so I decided to look it up when I got home and started taking photos.


I won't be using many of the photos I took in this post because looking back at them, honestly the poor deer looks terrible. It didn't smell at all-I think it quite likely died the night my friend found it-and at the time I thought dogs hadn't damaged it that much, but looking at the photos now I think I was wrong. The deer presumably died after being hit by a car but it's hard to tell which of its injuries were caused by the car and which were the dogs. One of its back legs was badly broken, which probably was the car, but its tail had been torn right off and was missing, which was no doubt a dog, and the unbroken back leg had been quite obviously chewed. There were also bloody marks on its muzzle, around the eye and on its head, which could have been a corvid, possibly the Magpie that was sitting in a tree above eying the deer while I was there. The fur on the deer was also thin with small bald patches, which I suppose could have been from poor health before it died, but I suspect dogs worrying the corpse as more likely.


But enough morbid talk! I may not be using my photos, but I did do this sketch:

Most of the deer I've seen in the wild are Roe Deer, and they are the most common where I live. I've seen Fallow Deer a few times in the New Forest, but all my other observations of (wild, non-park) deer have been of Roes. Going by my assumption that this deer would be a Roe Deer, hopefully you can see from my sketch of what its head looked like why I would say it looked odd. Firstly, its head is wide but tapers sharply down to a thin, pointy nose. The inside of its ear has very little hair on it, with only a tuft where it joins the head and the rest bare, pink-grey, slightly wrinkled skin. The top of the head has odd ridges on it, running down the nose. And next to the eye is a strange, curved hole in the skin. At the time I assumed this was more damage to the body.


I texted my friend to say I'd found the deer, and he texted back saying 'I think it's a Muntjac'. At the time I thought 'Nah!' because I was so convinced Roe Deer were the only species in the area. By the time I got home and had a chance to google Muntjac Deer, my friend was starting to doubt that it was one. However once I saw the results of my google search, I was absolutely positive it was! Because I saw...this:


Well, not exactly this one, this is a stock image of a Muntjac, but it does the trick. It really helped that I had spent so much time carefully studying the ridges on the head and the texture of the inner ears while sketching, because when I looked at the photos, those were the features that jumped out at me and made me certain. Here's a Roe Deer for comparison:


You can see the Roe's ears are much hairier, its muzzle less pointy, and it lacks the distinctive head ridges the Muntjac has. Incidentally the Muntjac in the stock picture is a buck with antlers and you can see they grow out of the ends of the ridges, making the antlers seem to lie along the head rather than grow out of the top like the antlers of the native British deer species. The Muntjac I sketched didn't have antlers but both sexes have the ridges, and it was mostly their distinctiveness that made me sure it was a Muntjac. In the pictures you can also see the Muntjac is shorter-legged, shorter necked and stockier, and its fur is a yellow-brown shade while the Roe is more reddish-brown. And regarding the hole below the eye of the Muntjac that I thought was damage to the corpse- the stock picture doesn't really get close enough but you can just see little marks below the eyes. According to the British Deer Society those are actually sub-orbital glands, which are very large on Muntjac Deer.


Until my friend found the dead Muntjac, I had no idea there were Muntjac in Hampshire at all, especially not in my area! I knew very little about them, and I still don't know much, other than what they look like and that unlike other deer they tend to be solitary. Road kill is always sad to see, but there are often times when it can tell you a lot about an animal, and as I've mentioned in previous posts the National Mammal Atlas accepts records of all signs of mammals, so submitted findings of road kill can help build a more complete picture of the distribution of these mammals, and finding and identifying dead mammals that you'd have little chance of seeing alive in the wild is a great way of building your own knowledge of the wildlife in your local area. When I post Mystery Mammals part 2, I'll show another example of the discovery of a dead mammal I didn't have any idea was in the area that was found as road kill. By the way, if you're an artist interested in animal anatomy like myself, I highly recommend sketching dead animals from life, if you have the time and it's safe to do so (obviously if the mammal is in the middle of a road and it isn't possible or hygienic to move it, then maybe photos only!). Drawing the Muntjac from life when I didn't know what species it was helped me pick up on the details that would later allow me to identify it without doubt, and I got a sketch that I'm very happy with and which is much better observed than if I'd copied one of the photos I took instead.

The sketch isn't the only thing I have relating to this deer. When I finished sketching and photographing, I was walking out of the area of woodland when I noticed a patch of fur under a tree. It was clearly the deer's fur, and nearby I found a much larger scrap that I realised was the deer's entire tail that had been torn off by a dog. On a whim, and thanks to a plastic sandwich bag I'd brought in case I found any feathers, I picked it up, wrapped it in the bag and took it home. My friend (a different friend) knew a bit about preservation techniques for pelts, and I thought I'd show it to her and see if she could teach me how to preserve it.


Mindful of decomposition, I asked her as soon as possible and she recommended I cure it with salt. Looking for a little more information, I discovered this tutorial about salt cure taxidermy. It recommends iodized salt, which I found without too much difficulty in a medium sized supermarket. Before starting I examined the tail and found it had come off relatively cleanly, and though I could feel a firm line along the middle where the end of the spine would go, there was no bone left in it at all- it must have remained on the carcass when the tail came off. The firmness was just the edges of the hole the spine had been in pressing together.


As the tutorial describes, I covered the bottom of a small box with a layer of salt. Then I sprinkled salt over the place where the tail had come off the body, as this is the area that needs the moisture drawn out of it the most, and then placed the tail in the box. Then I covered it up with salt and left it for 8 weeks. (The tutorial says 6-8 weeks depending on size but I went with the longest option to be safe!) 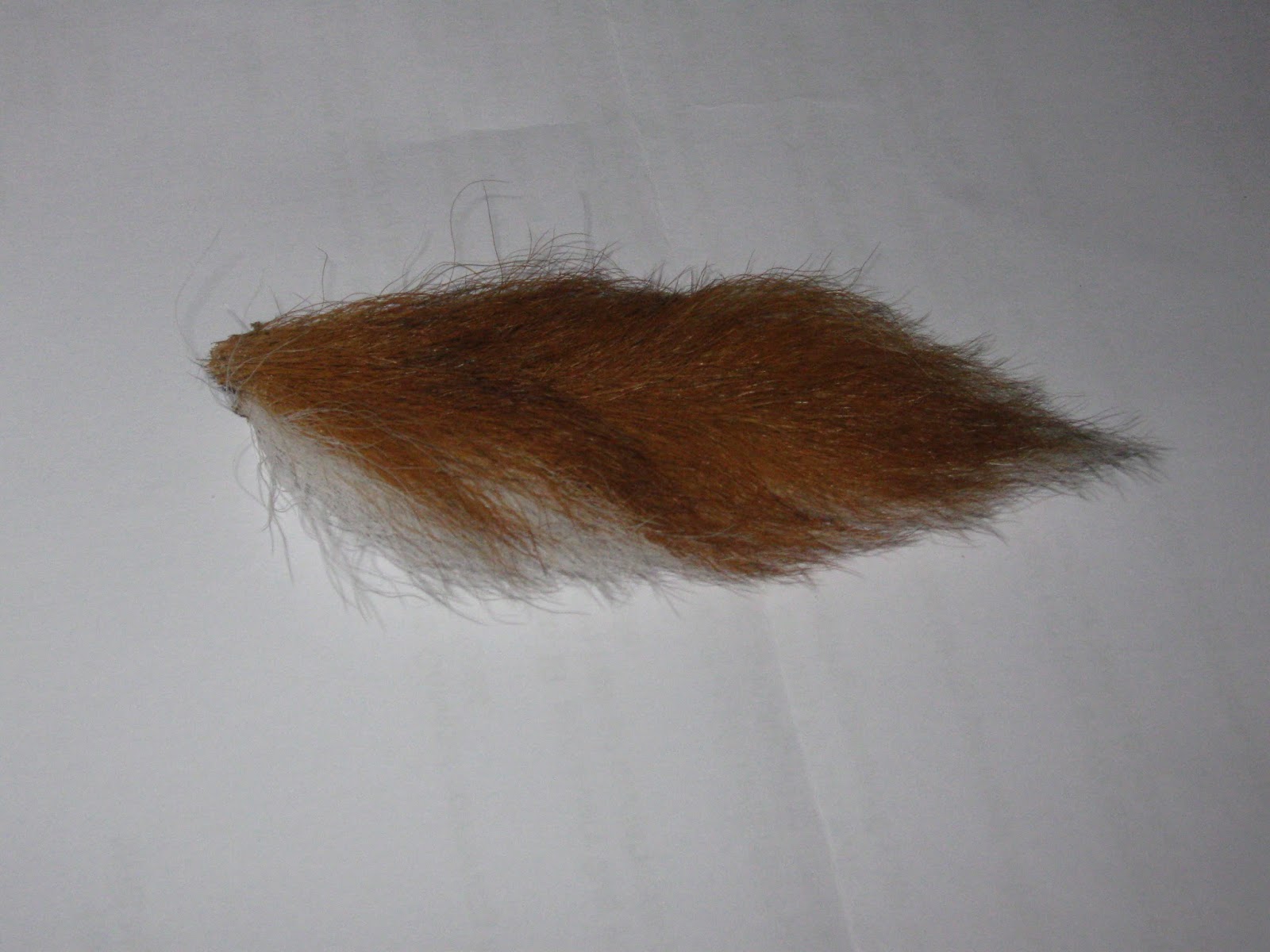 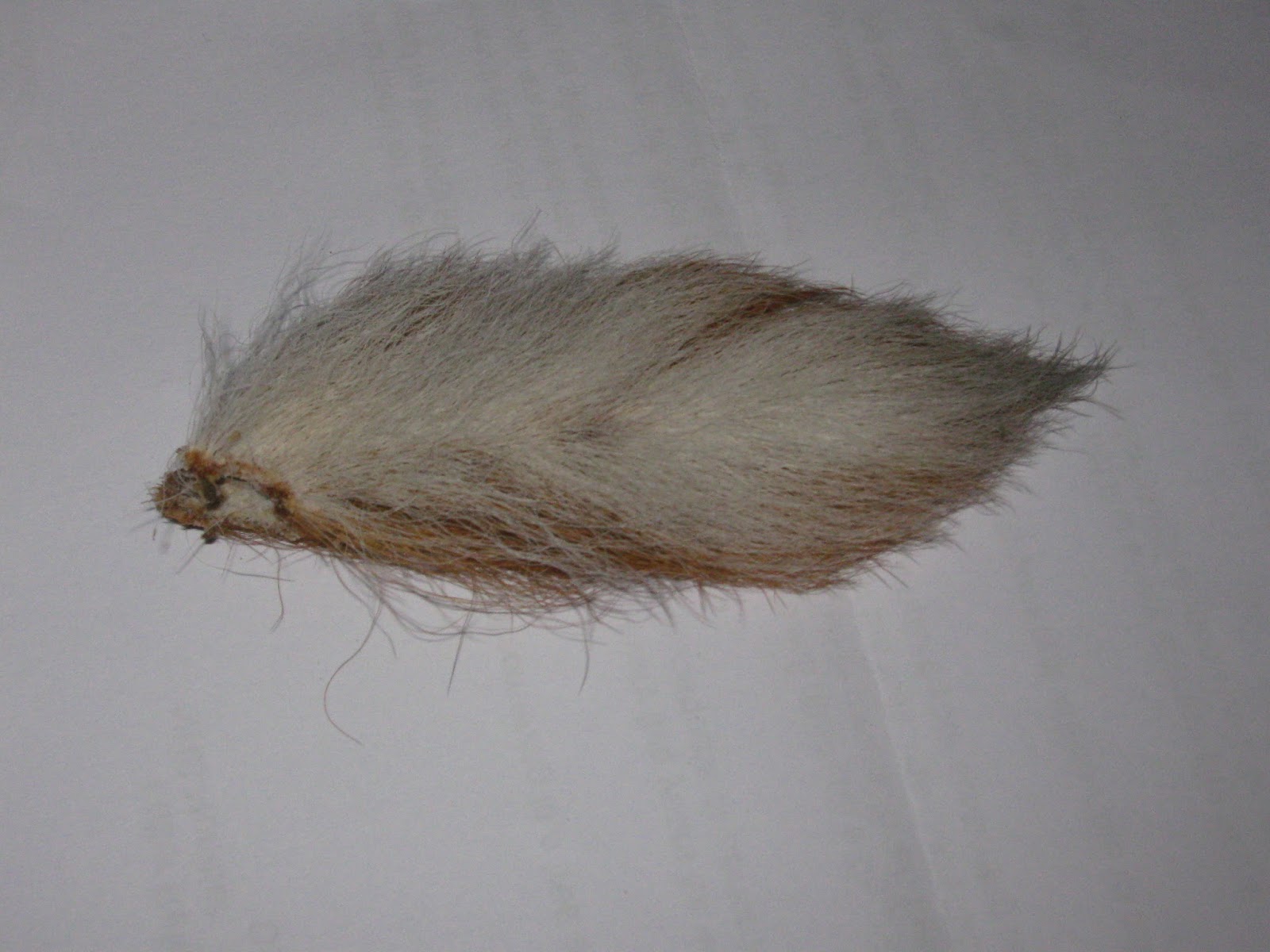 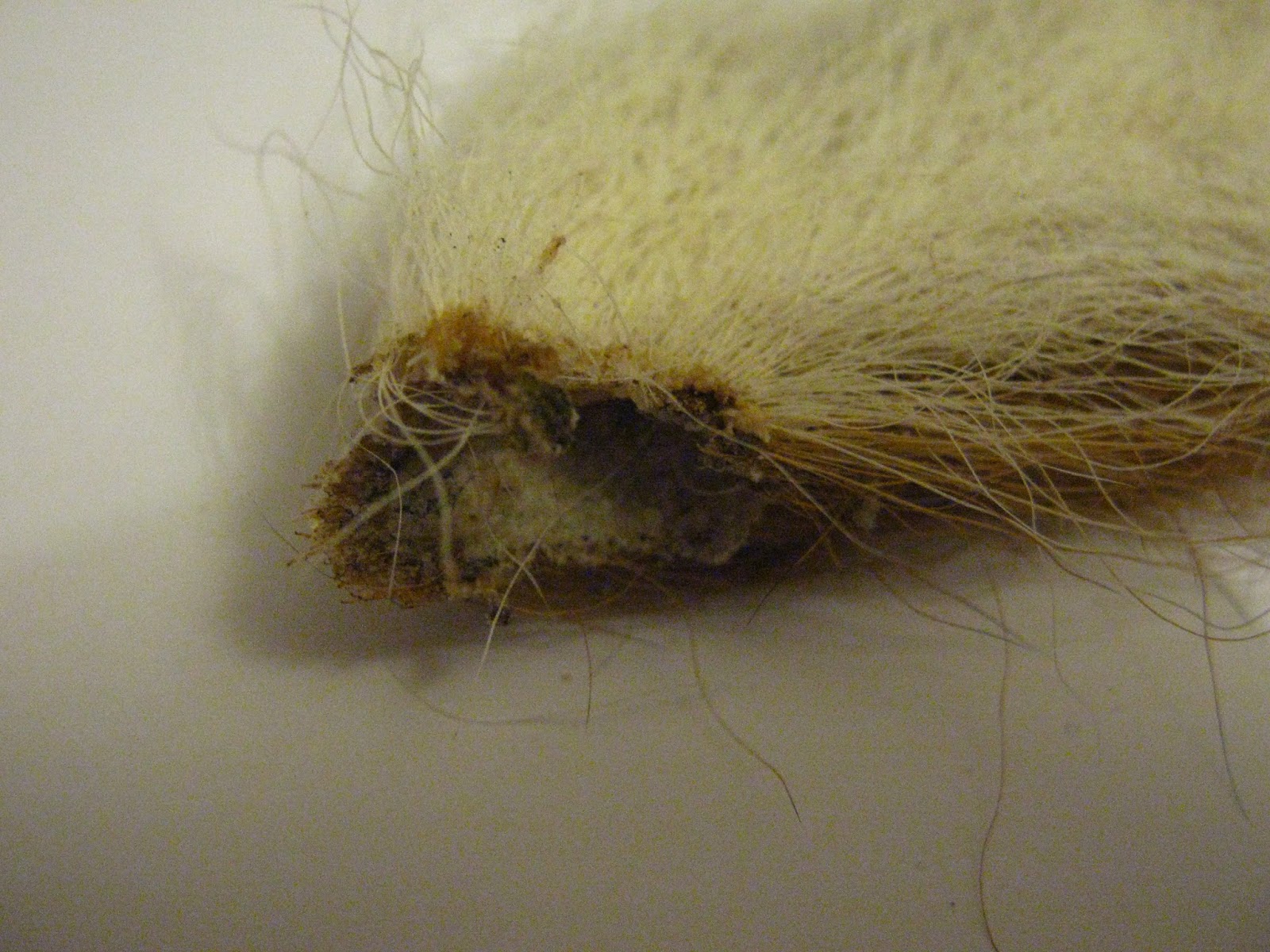 Look at the gorgeous colour in that fur. :) As you can see from the bottom photo, everything dried out just fine and though there was never much flesh on it, what there was is now preserved.

The Muntjac tail is now part of my not-very-big collection of things that aren't feathers. I have a few small bones, which I will write about one day, and a Roe Deer antler (bought not found, sadly), and now my first tail, of an animal I've never seen alive. I doubt I will make collecting tails from road kill into a habit but it's an interesting part of my naturalistic collection. I sometimes read blogs of people who skin animals and preserve the pelt, or stuff roadkill, but I'm not interested in doing any of these things myself, nor am I interested in making jewellery out of (legally collected) preserved animal tails, which the tutorial I used seems to have been made for the purpose of. It's interesting to read about these things, though! That reminds me, I really must start a blogroll in a sidebar on this blog showing blogs I read and admire.
Posted by E at 19:27