Guessing at Fungi, and a Sly Visitor!

If you've been reading my blog in the past few months you will know that I love fungi, but it's really a very recent thing that was kickstarted last autumn, when I was looking for birds (unsuccessfully) in a local wood, and suddenly noticed I was surrounded by autumn fungi, of all shapes and sizes. Then it turned into an obsession when I was in a German wood and found fungi in red, yellow, green and purple, and all kinds of shapes and textures. From then on, I've been noticing fungi everywhere.


I can't remember why I never noticed fungi before this autumn, as I was always out birdwatching before that in places where fungi might be found. I think it was something to do with an idea I had about most fungi being brown and white mushrooms that all looked the same and weren't very interesting. I knew there were more different shapes and colours and textures, but I thought you had to be an expert to find those ones, and you'd only get to that point after getting really good at looking at the brown mushrooms. However, I now realise this is absolutely not true- once you begin looking out for fungi you will start to realise that some of the commonest species of fungi are some of the most brightly coloured, strangest in shape, and weirdest in texture! I'm going to go on to show you some examples that I found in the past couple of months at my local patch during my weekly bird-counting visits- despite the bright colours of some of it, I might have overlooked if I hadn't had my eyes open for fungi.


First, a quick note: fungi is awesome to look at, but even species that look really distinctive can be strangely hard to identify. I found this out with my Meadow Coral/Yellow Stagshorn confusion in the Germany post I linked above, and from some correspondence I had with the excellent Mark Baldwin at Wildlife Online (http://www.wildlifeonline.me.uk/) I learned that photographing fungi where it grows may not be enough to always be sure of a positive ID- you may need to photograph the gill structure as well, or cut it in half to look at the structure inside, or for some of the 'brown mushrooms' I mention above, you might even need to taste the fungus's secretion! (Note: do NOT do this unless you are an expert!!! I certainly won't be trying it for a while!) The identification book for fungi that I use (which Mark also recommends), is Mushrooms by Roger Phillips, which I have on long-term loan from my dad, but I really must get my own copy ^^- this book includes how common a fungus is which is really useful (and also how poisonous/good to eat a fungus is, which is just interesting!). To back this up, when I think I've IDed something I use the Hampshire Fungus Recording Group website that I mention at the end of this post, and if there's not many records of it I reconsider the plausibility of my ID. I may also do a google image search on a species I think I've found, especially if it looked close but was a slightly different colour or shape than in the picture in the book, as fungi are widely variable in colour and shape (some with age, some...just to be annoying, I think XD) and an image search should show you several variations of the same species. 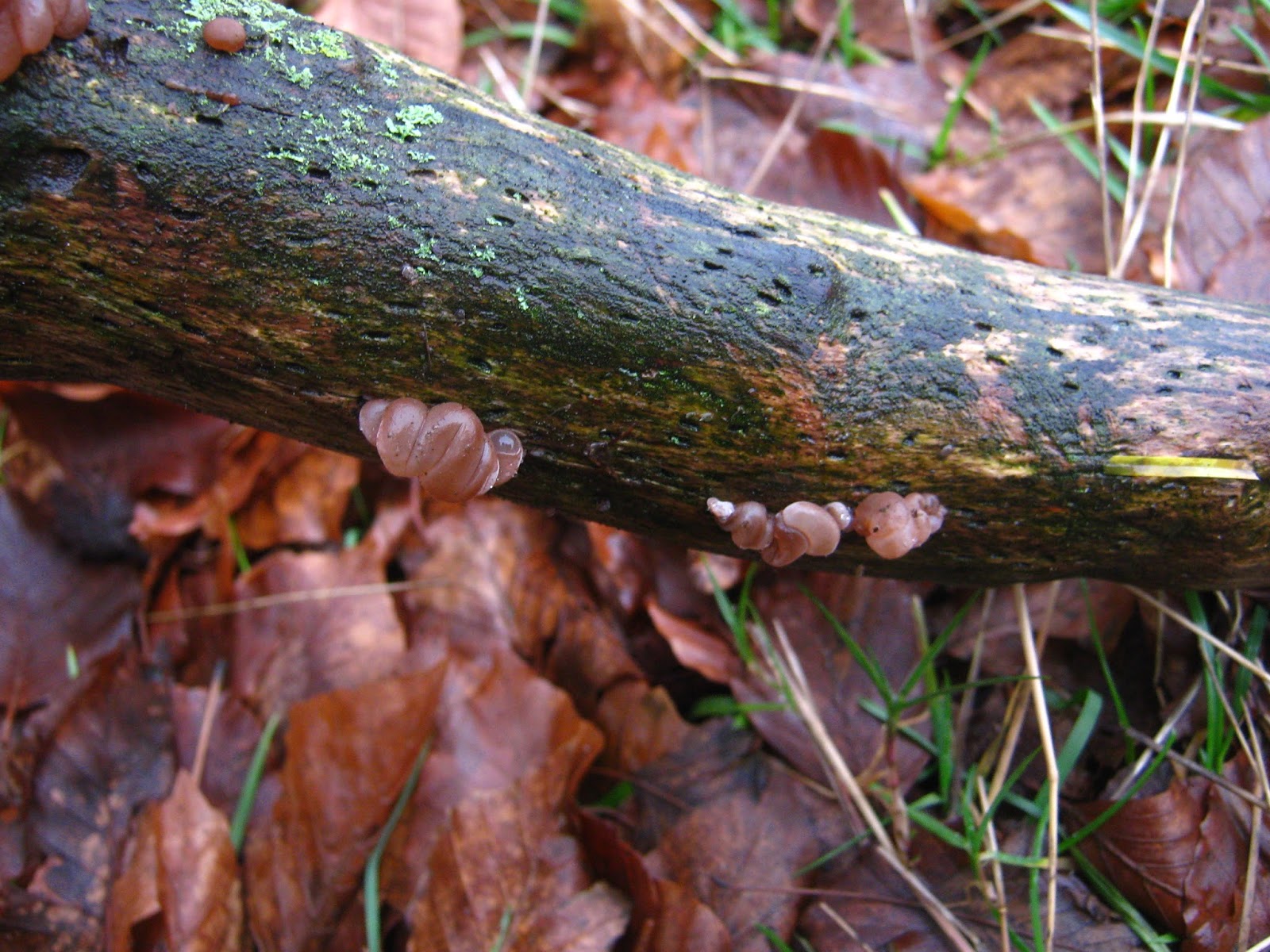 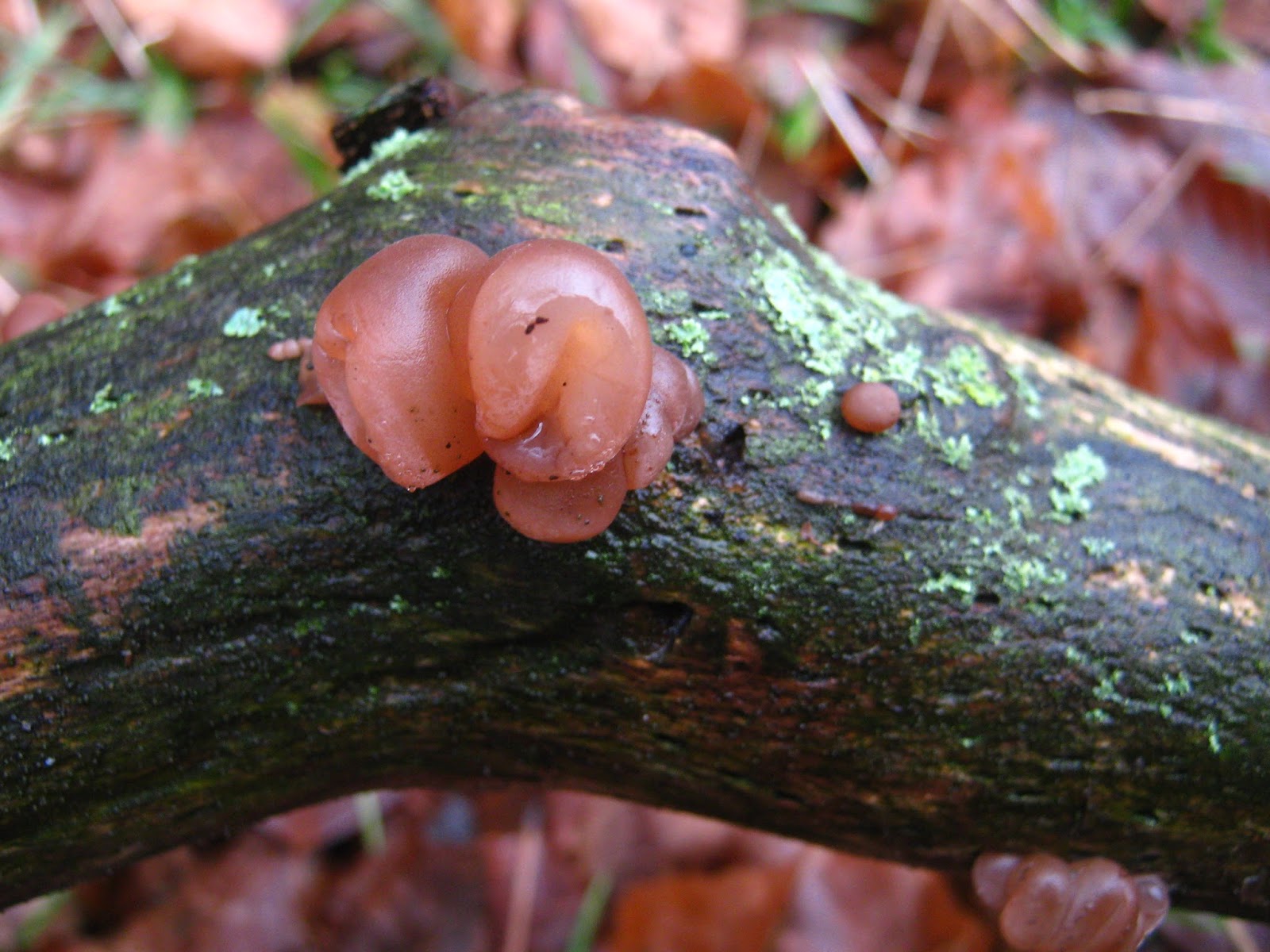 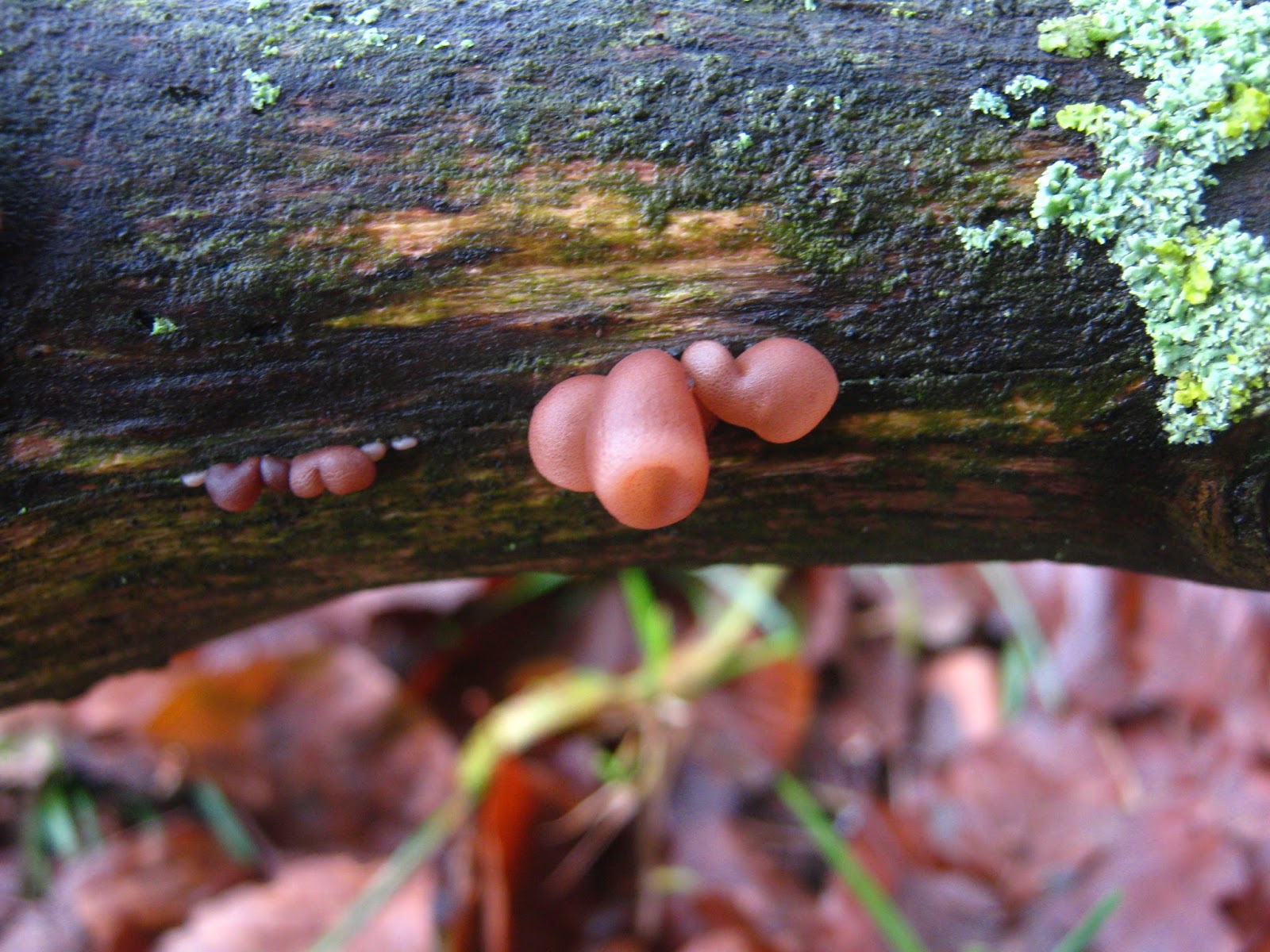 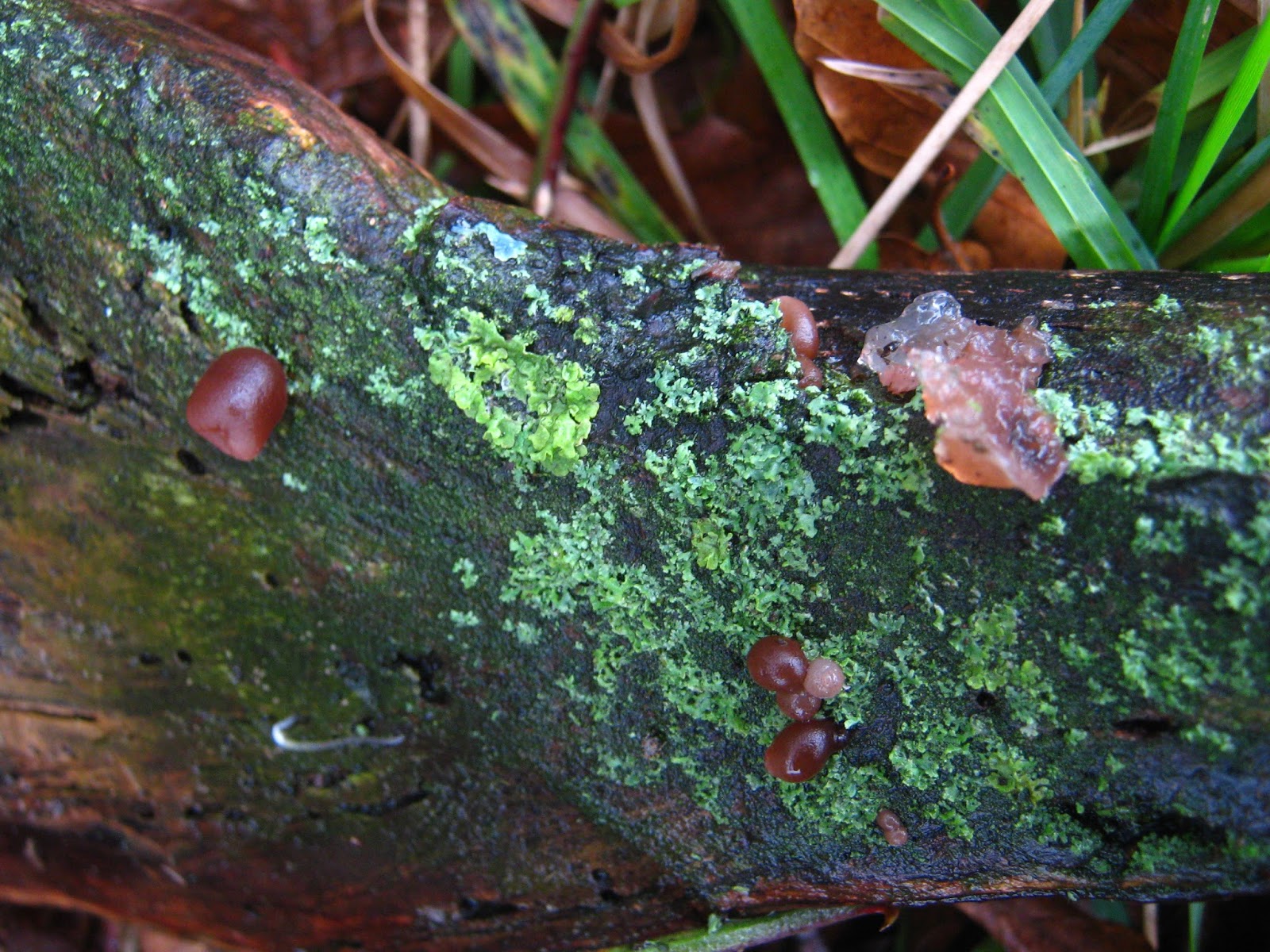 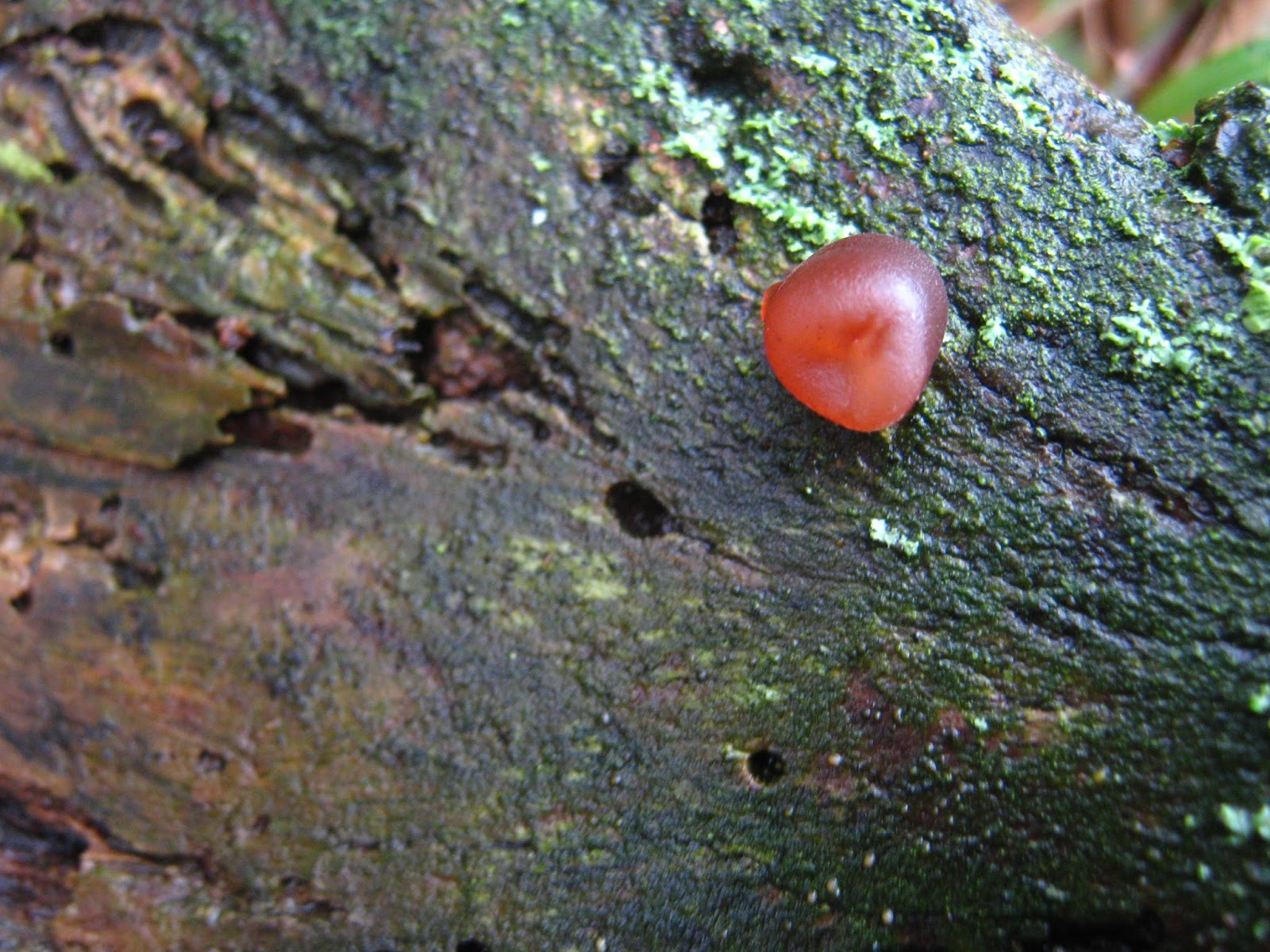 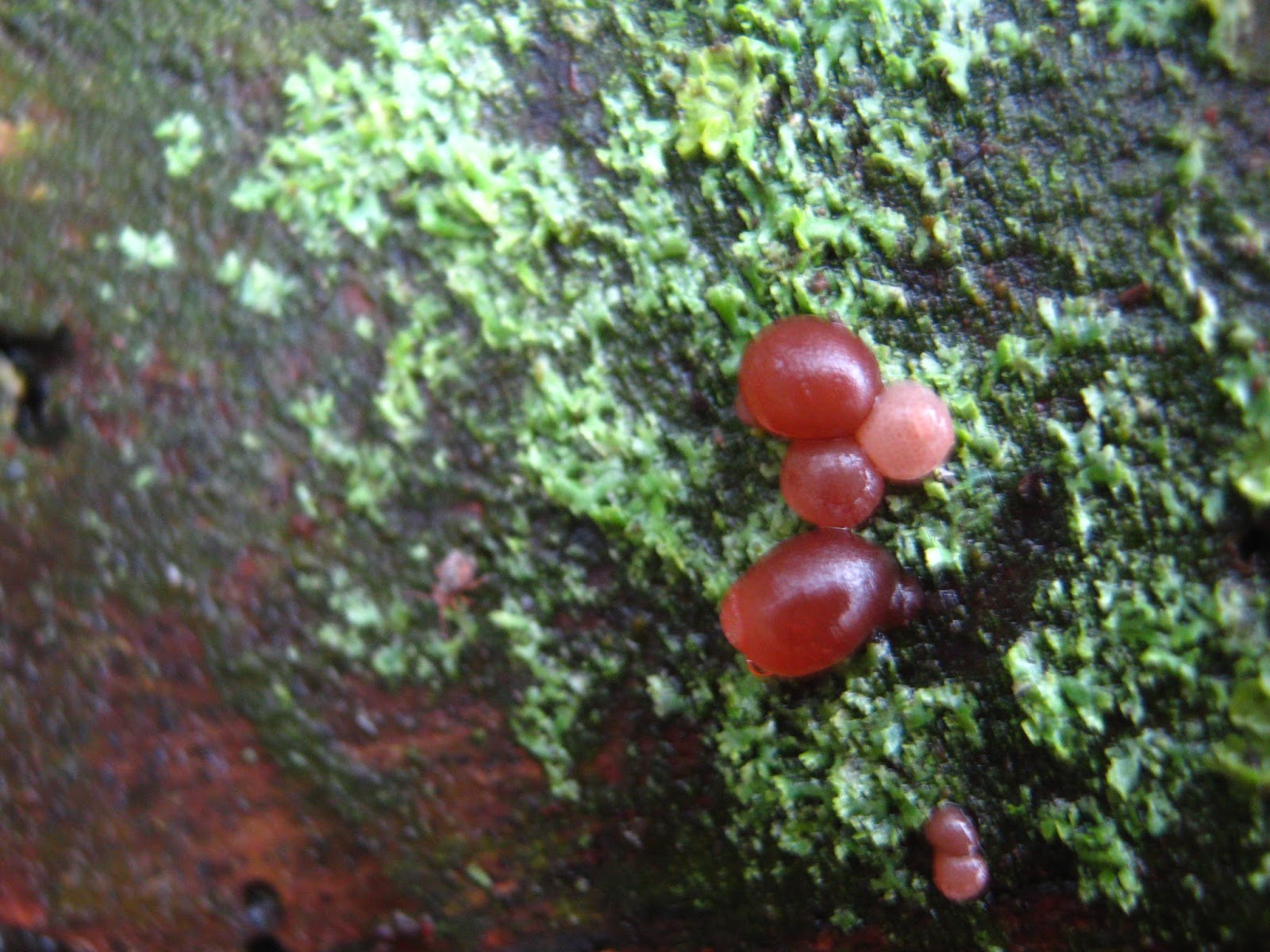 I think these interesting little things are most likely to be Common Jellyspot, even though most of the pictures I saw of Jellyspot were more orange than these various shades of pink and maroon! I love the huge variety of shapes, sizes and textures that were all on the same log. The incredible smoothness, curvyness and shininess looks like some sort of modern art. Looking back at these photos now, I kind of wish I'd poked them with a stick to see if they were as squashy as they look! In the 4th photo down is what looks like one that's been squashed, so maybe they are. 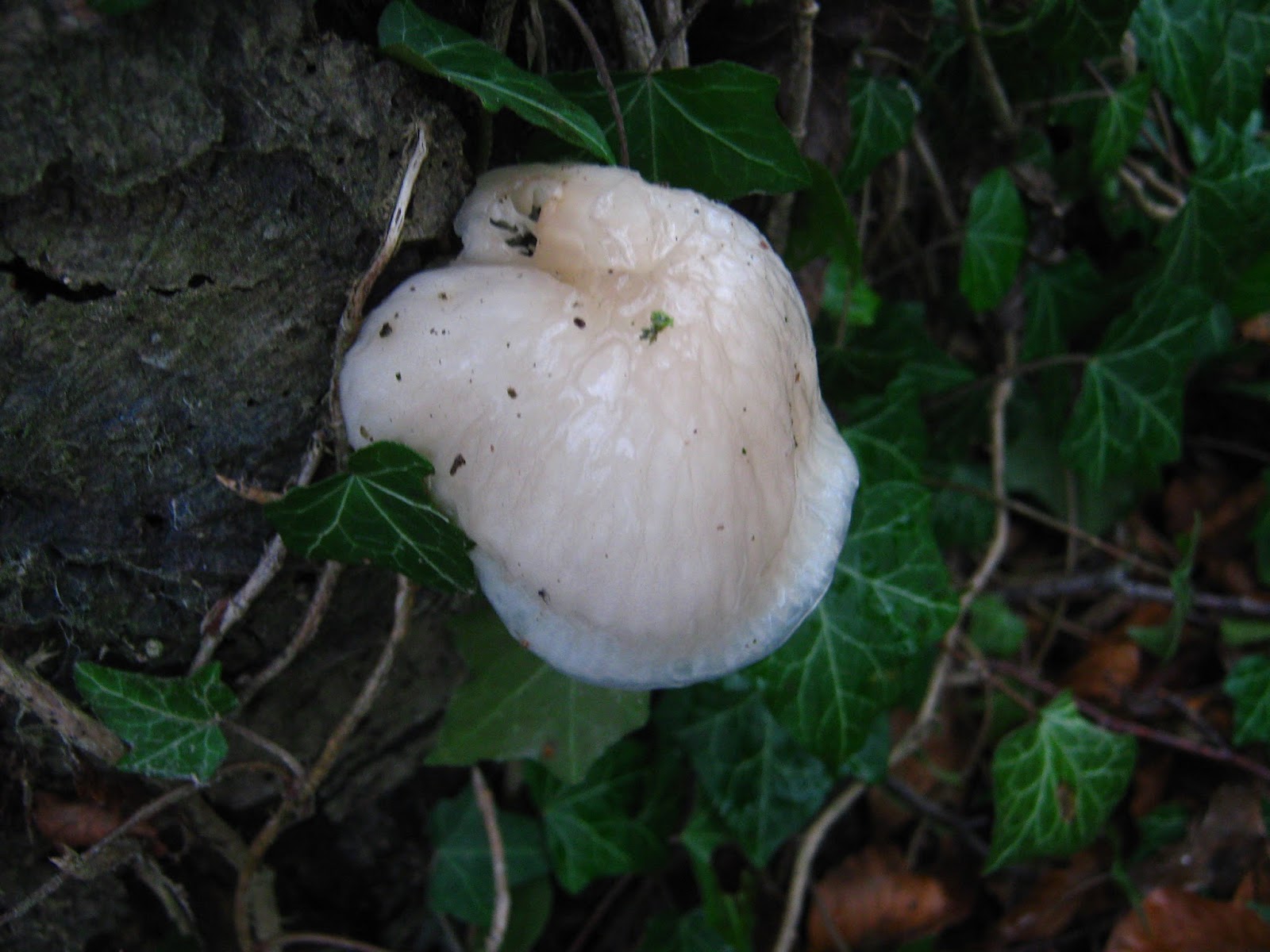 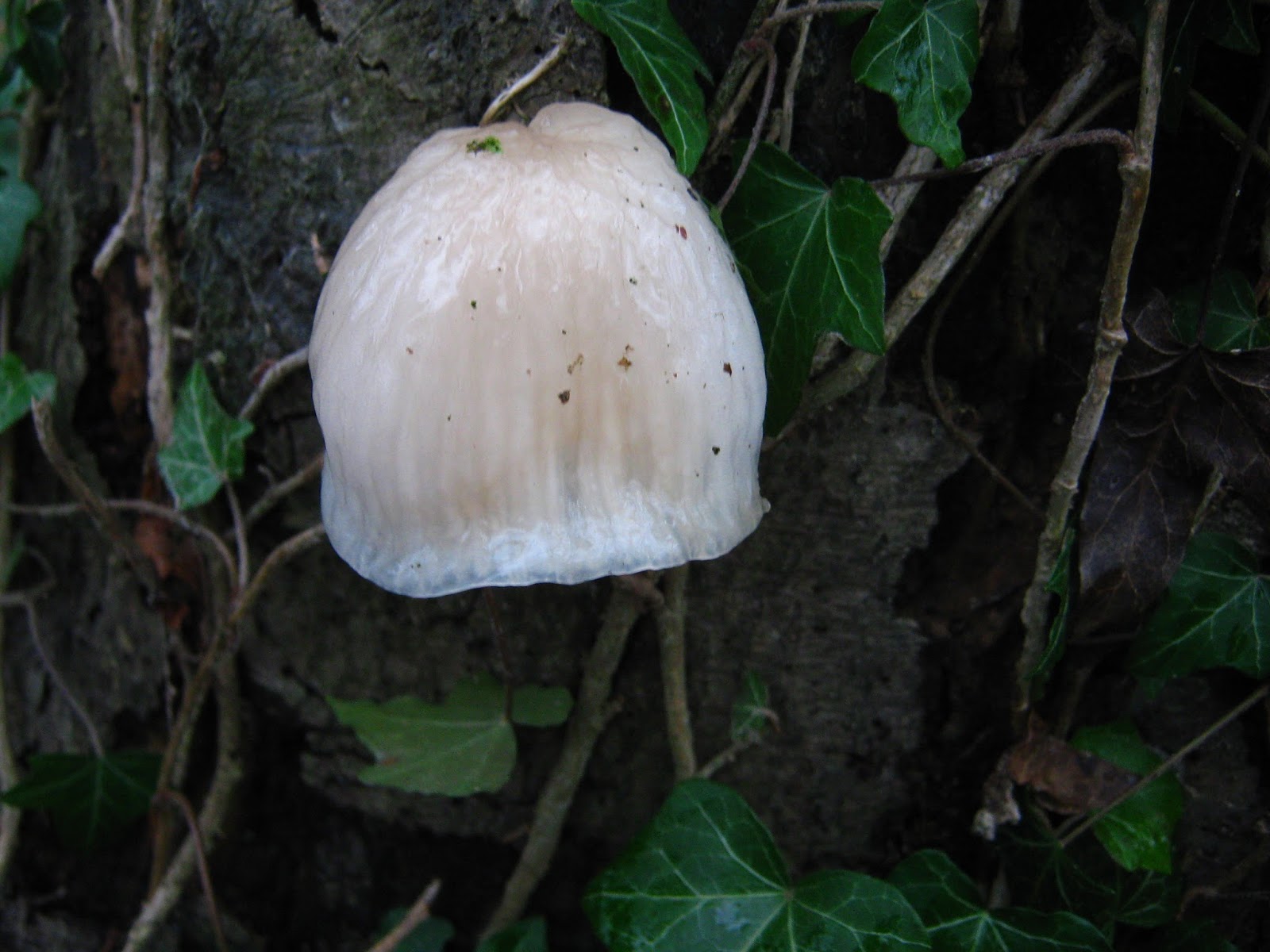 These are both the same one- you can see in the top one how it seems to melt into the tree, and in the second one how high the dome is. I love this one because of how wet and jelly-like it looks, as if it's sort of melted down over the bark! Unlike the Jellyspot (and most other fungi I seem to see), this one was on its own. This was hard to ID but I think it might be White Milking Bonnet? Heeding Mark's advice about the gill structure, and also because I wanted to see what the stem was like under the cap, I took the following photo: 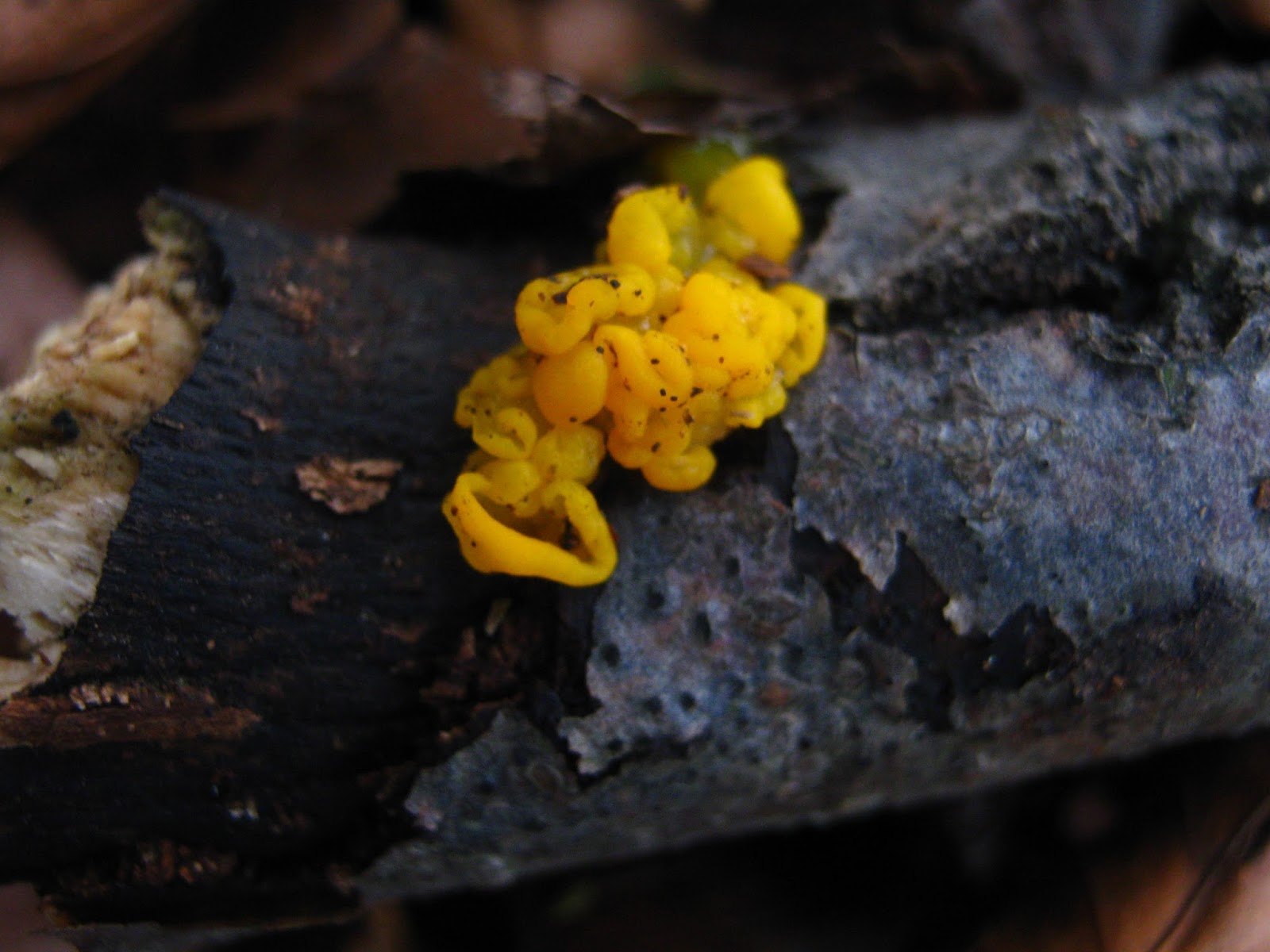 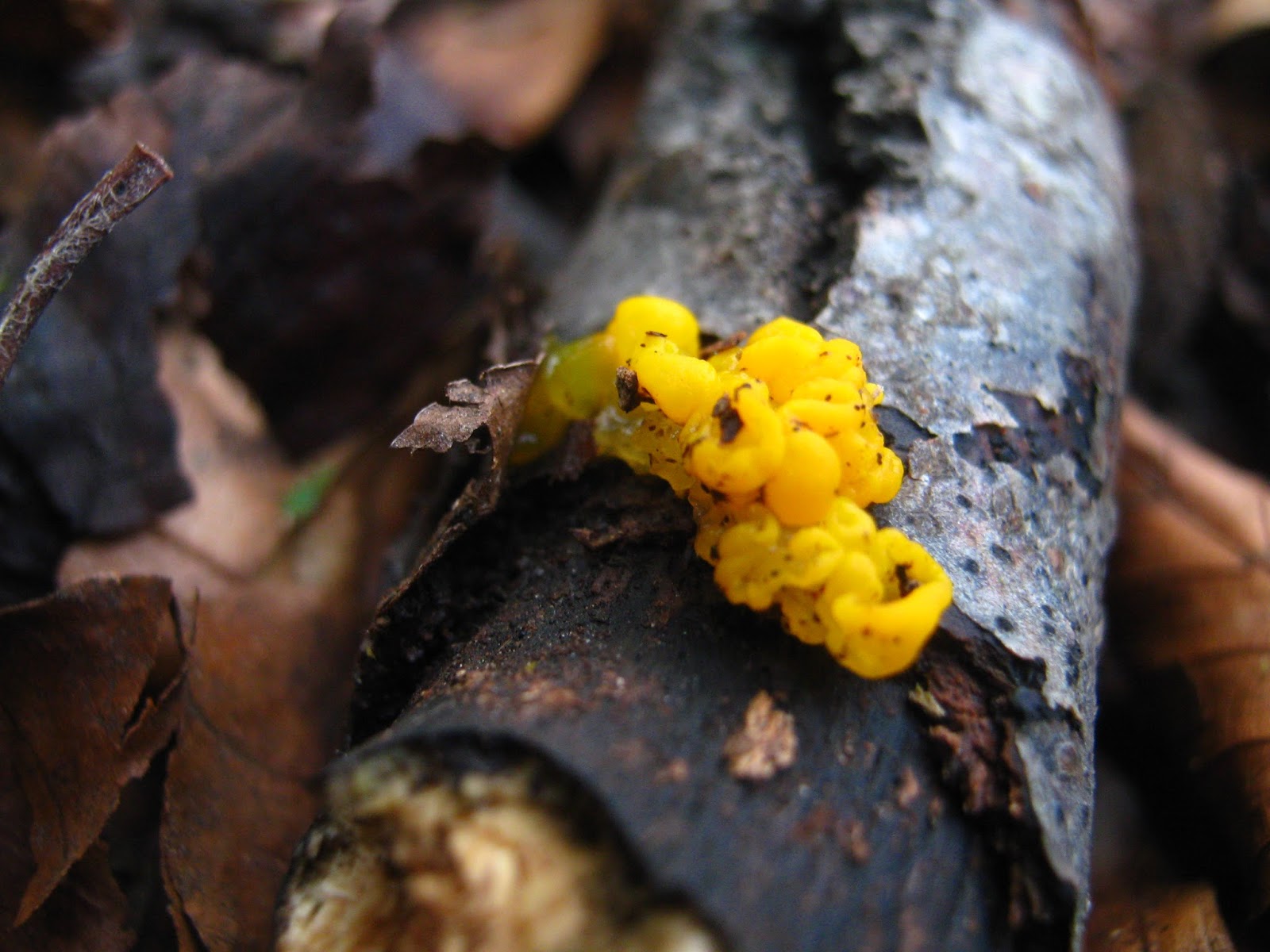 This little bright one was a relatively easy; it's a Yellow Brain fungus! I couldn't have thought of a better name myself. Again, these are photos of the same one from different angles. 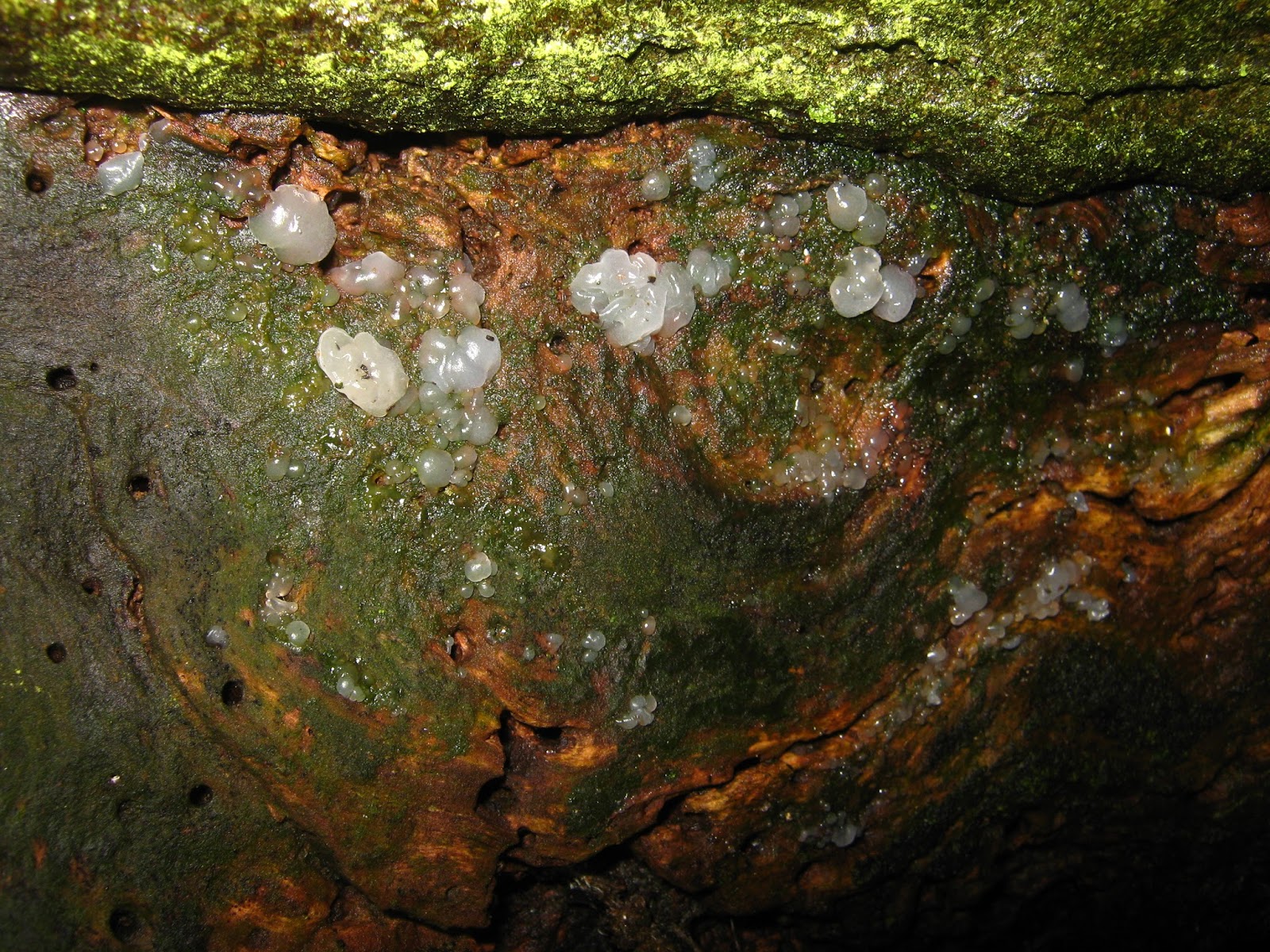 This one was an odd one. It looks quite like the Jelly Spot without any of the colour, but I found a photo of a fungus that looked like it in the suggested images while looking at google search results for the Yellow Brain- clicking into it showed it was called the Crystal Brain. Despite the name, as you can see it's not really that similar looking to the Yellow Brain, and the Latin names (Tremella mesenterica and Myxarium nucleatum) suggest they are not closely related at all. (Even fungi that do look alike aren't necessarily related, of course!) Crystal was the closest ID I could find for the fungi in the photo, but weirdly Crystal Brain wasn't in Roger Phillips' fungi guide at all, not even under the Latin name. But when I searched the name in the Hampshire fungi site, there were many records. Does anyone know why it might not have been in the book? Very odd, and it's a good thing the name is similar to the Yellow Brain or I might never have even had an idea what it might be!

The more interested I get in fungi, the more I see it everywhere! And to an extent, the same thing is happening with signs of mammals. As I wrote about in this post, I've been keeping notes about signs of mammals I see for the National Mammal Database, and my local patch is no exception. Warning in case you're eating dinner: poo pictures to follow!


Up at the top of my patch there's a railway line surrounded by scrubby vegetation, and back in January I detected a sly visitor up there! Unlike most mammals, you can sometimes detect this one with your sense of smell. Walking along the field margin next to the railway line, I smelled a distinctive, spicy, peppery odour that can only mean one animal- a fox! And aside from the smell, there were various visual signs. 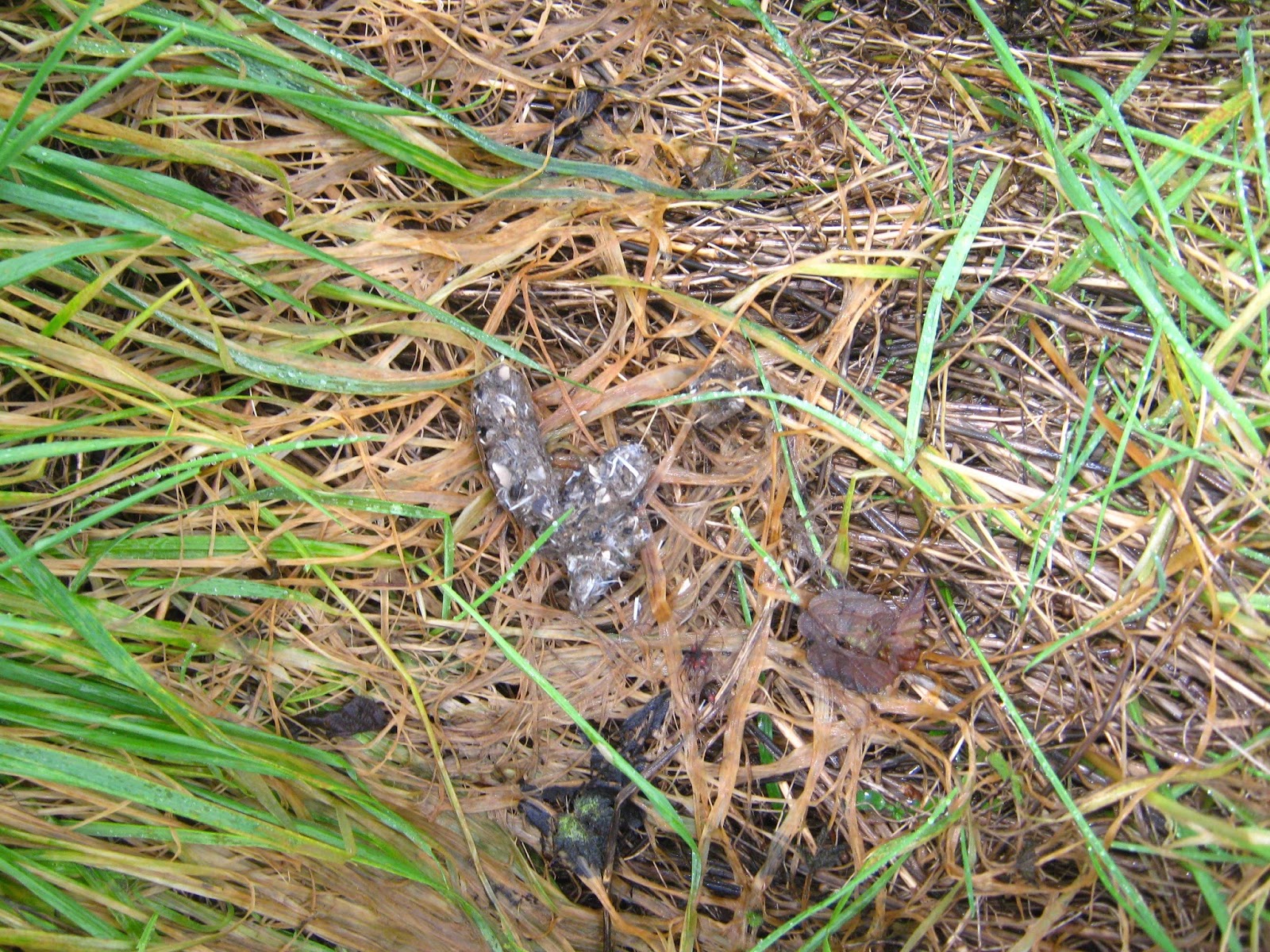 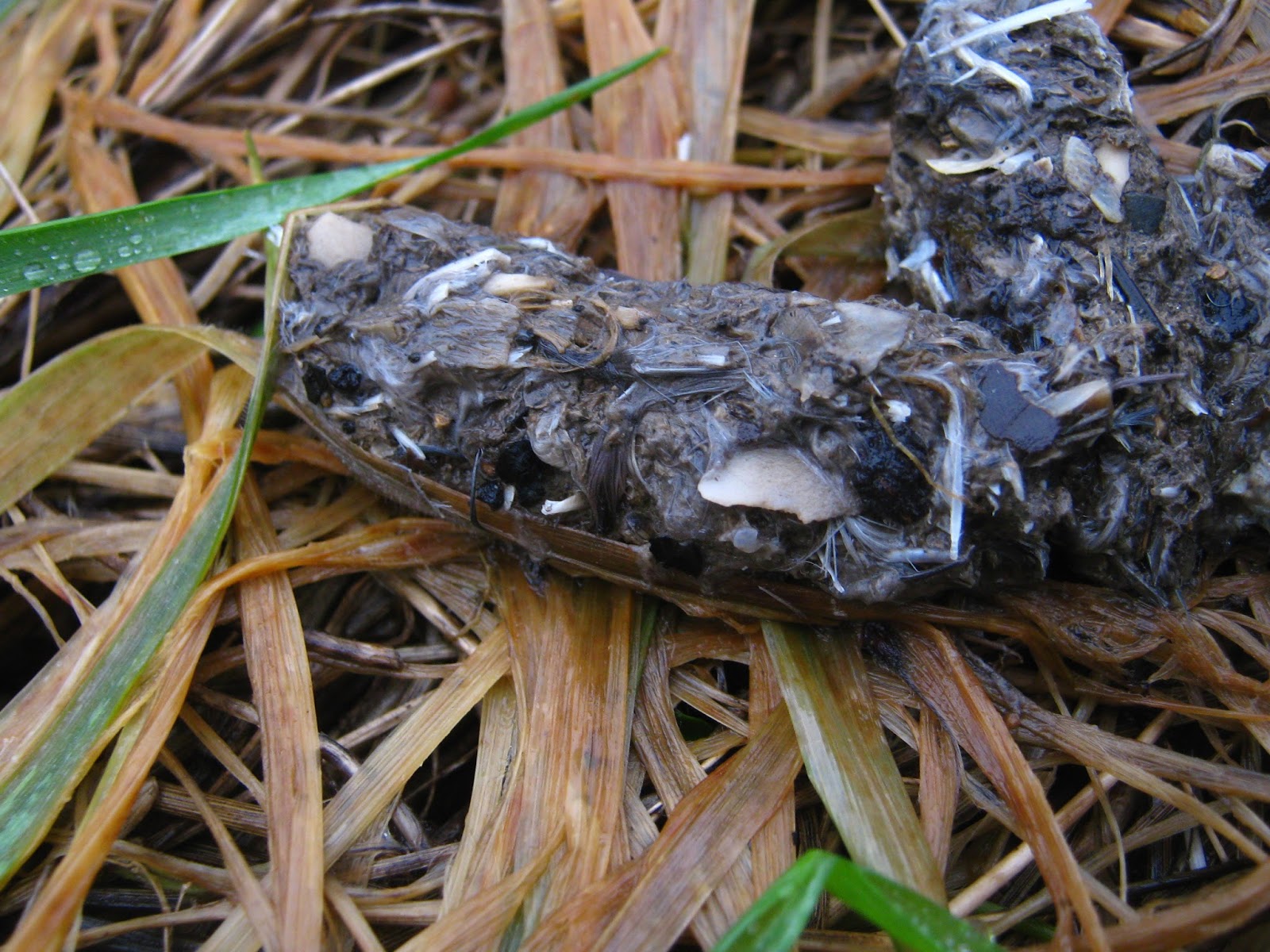 My local patch is very popular with dog walkers, and unfortunately a large number of them don't clean up their dog mess, so dog would be the main confusion species for these droppings. However as you can see from the closeup, there are feathers and what looks like crunched up bones in this dropping, not something you'd generally find in the poo of a dog fed on dog food. Plus when I was taking this photo, I noticed that the smell was...actually not as bad as you'd expect from a dog! While dog poo really stinks (and it makes my patch a bit unpleasant on a hot summers day, I can tell you!) this poo merely smelled like more of the fox smell, which wasn't unbearably unpleasant. I haven't included badger as a confusion species for this despite the size being similar, because I've seen no evidence of badgers at my patch or in the area at all, and don't think it's likely. But as I mentioned in the post I linked at the start of this section, badger poo doesn't really seem to have a smell.

I also found these nearby: 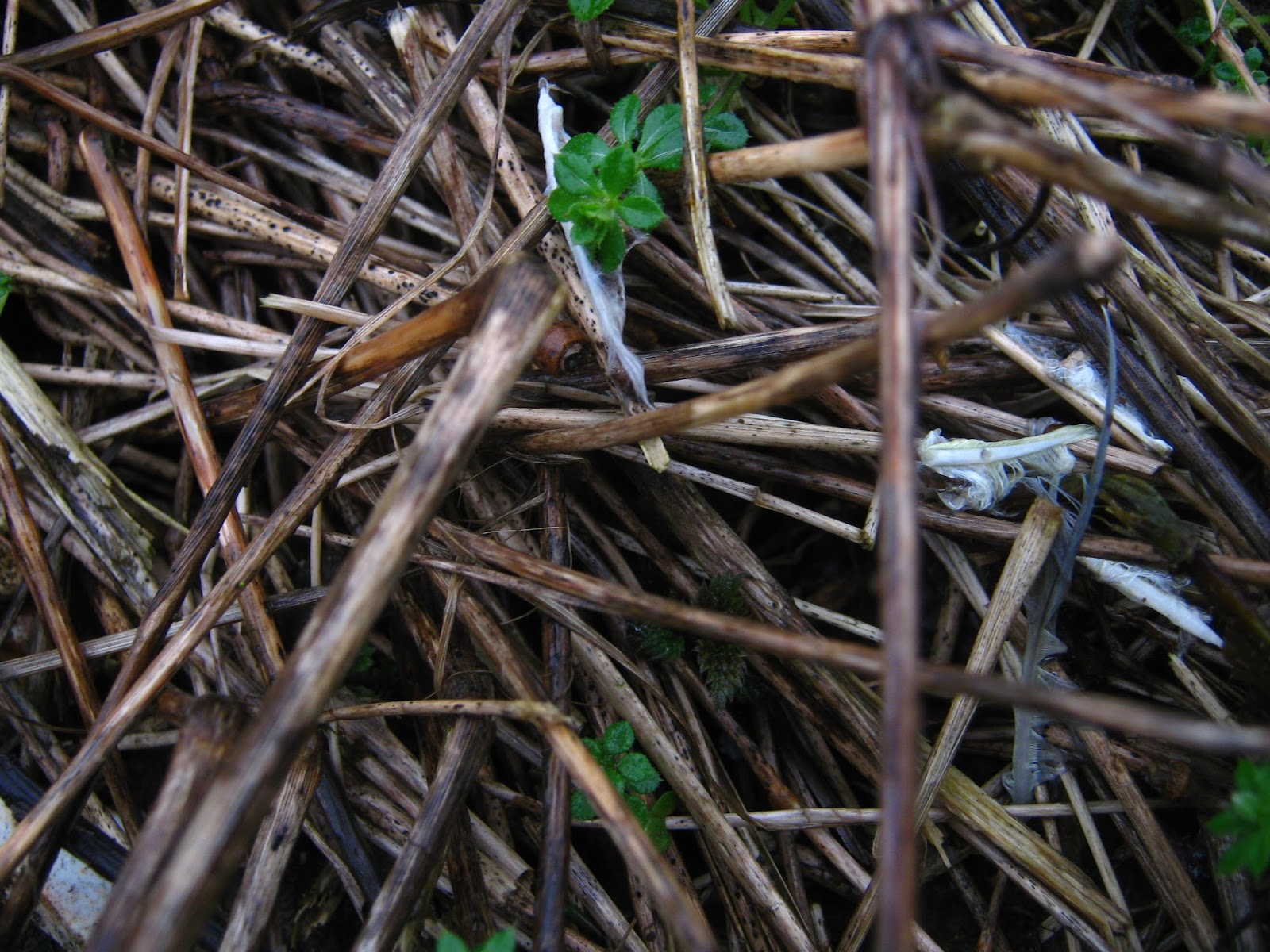 Considering that the fox droppings had feathers in them, and these Woodpigeon feathers have been broken off by the shaft, I suspect that someone caught a pigeon and ate at least some of it near here! A sign you can use to tell if a mammal removed the feathers from a kill rather than a bird of prey is if the feathers are bedraggled, which can be due to the saliva of the animal and the fact that they sometimes chew the feathers. However in this case I think they're bedraggled because of the rain. The feathers in fox poo show a much more likely connection.

And finally, I found what looked like trails a fox-sized animal would make while pushing through the undergrowth: 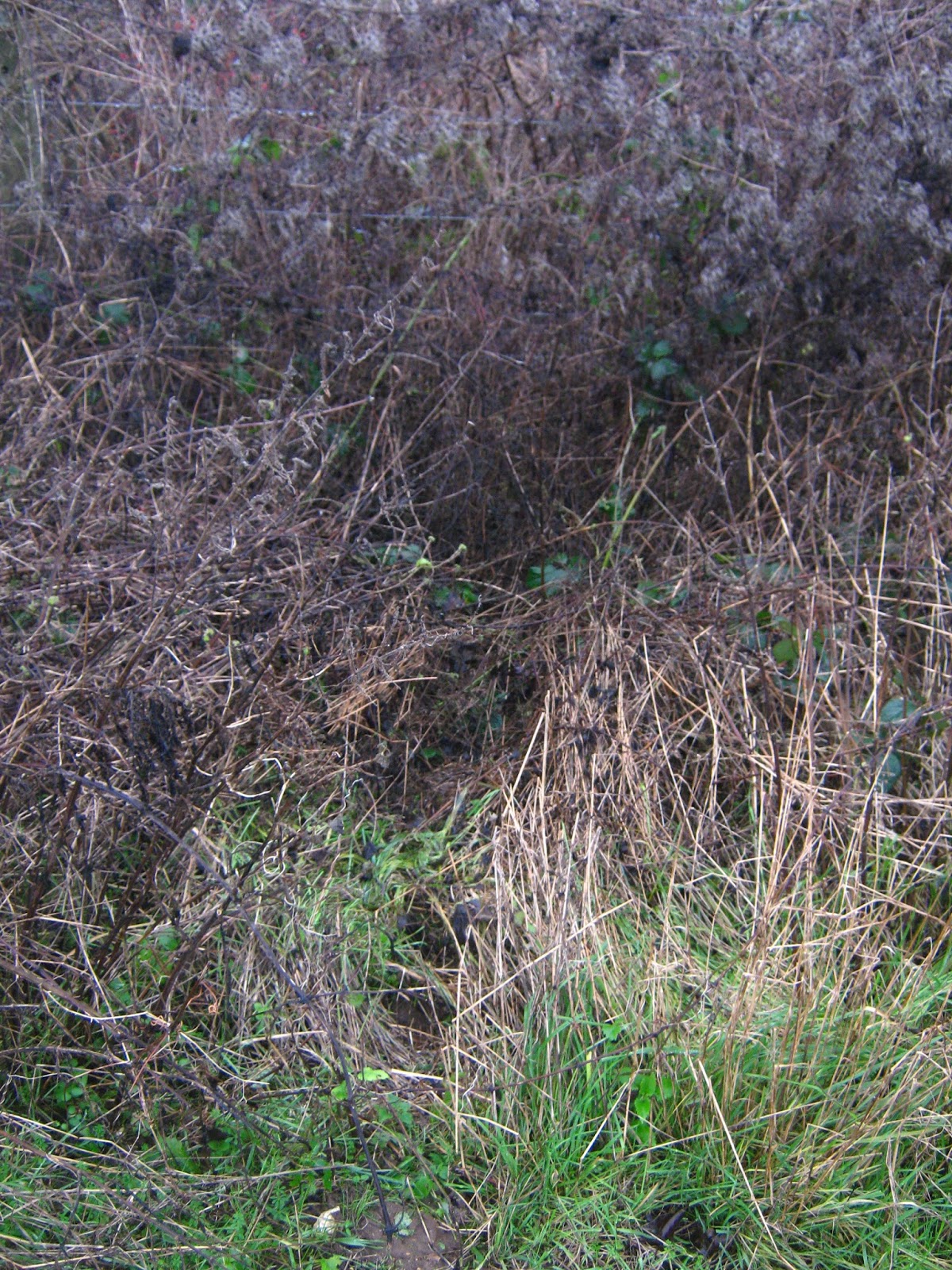 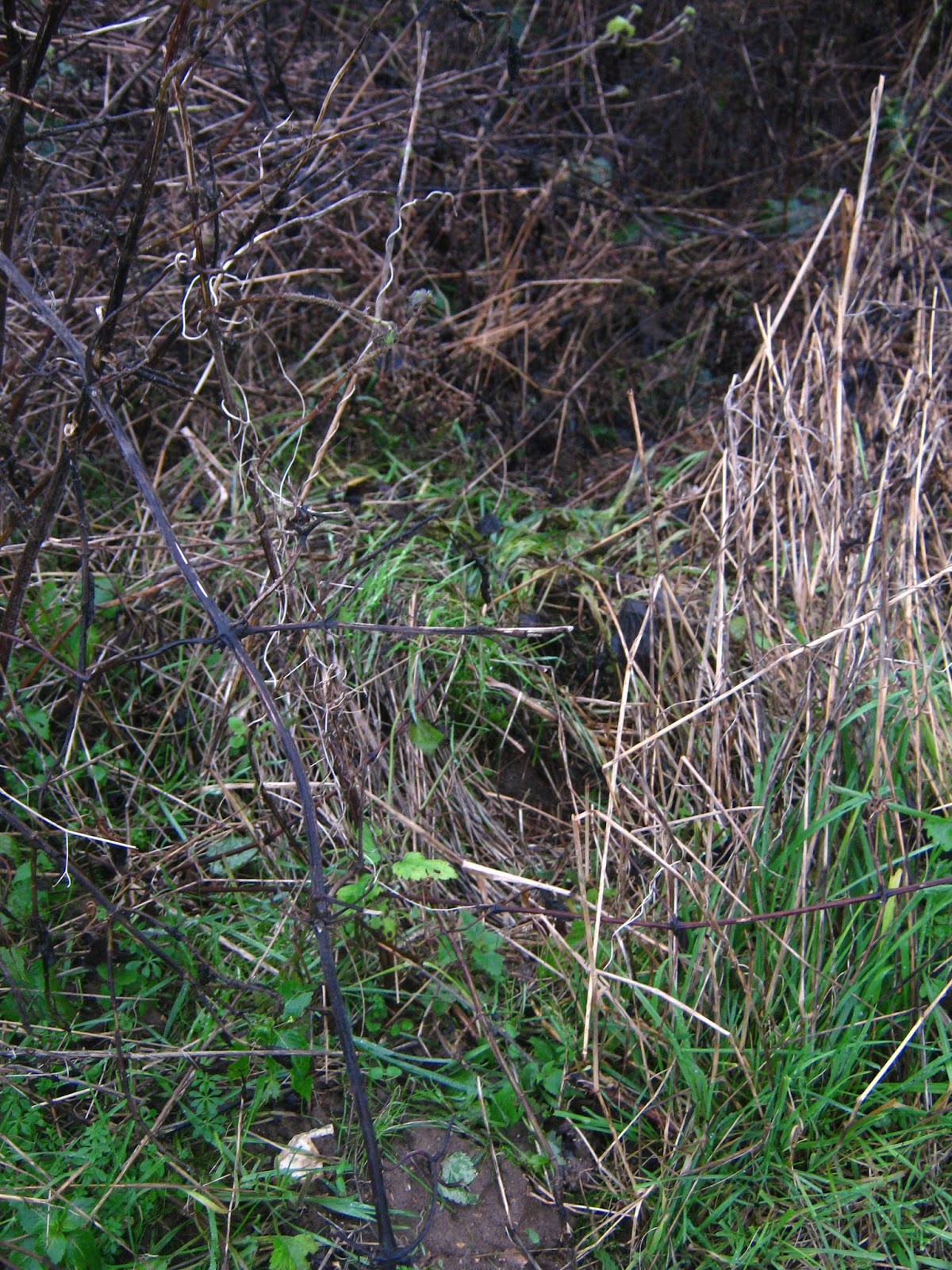 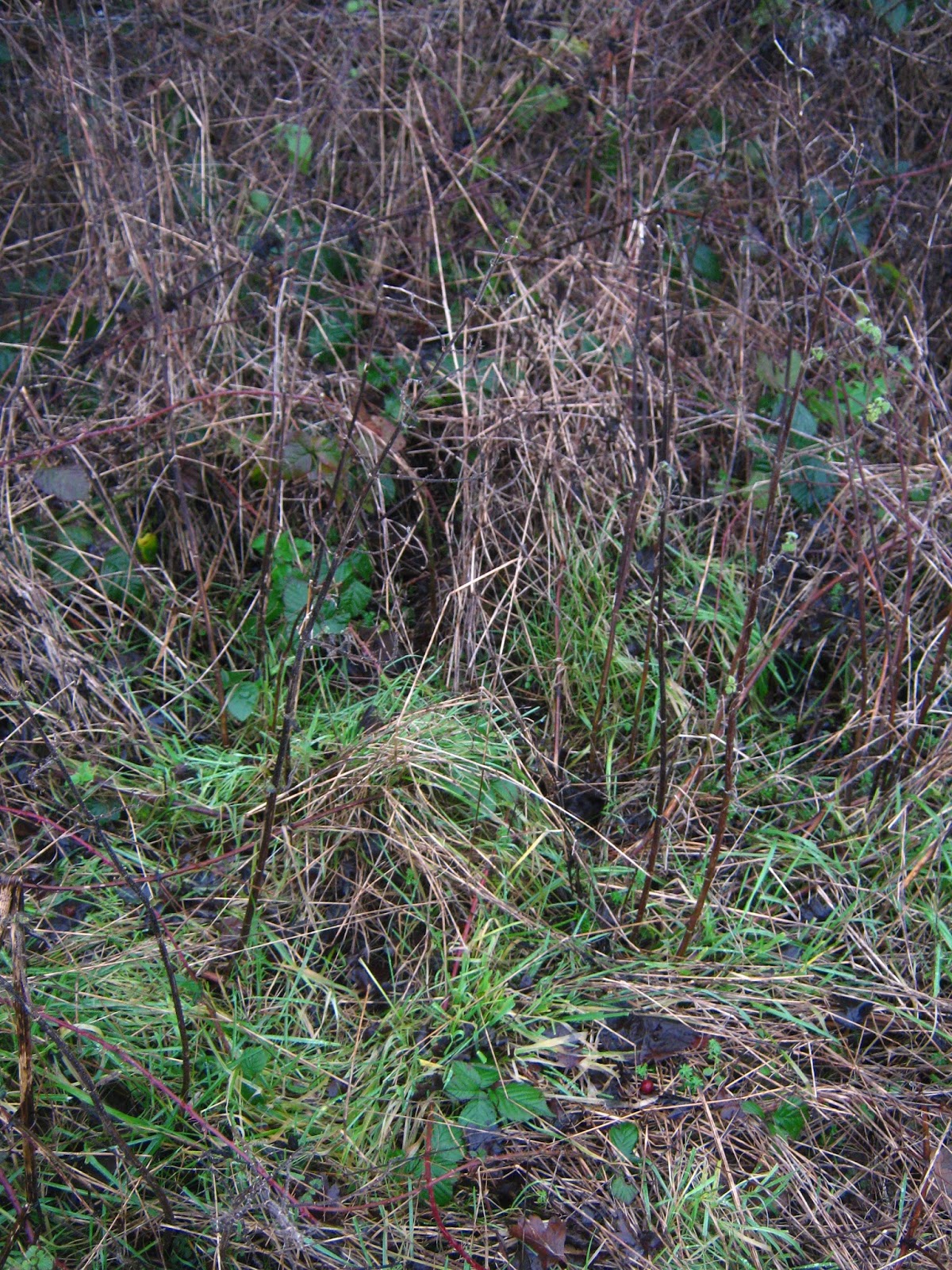 I was glad to find so many signs of my sly visitor! I don't know if any foxes have a territory nearby, and I've never seen or heard one in the area near my patch (it's near the suburban neighbourhood where I live, and I've never had any reason to believe there are urban foxes about), so it's possible this fox was just passing through. I did smell the foxy odour on a couple more visits since this, but never found so many clear signs again. This was all found a few months ago, I wonder where the fox is now?

It's funny- the more I look for different types of nature, the more I realise the value of educated guessing. You may not know 100% what you're looking at all the time, but you can get better at guessing, while waiting until you know more, or perhaps meet someone who knows more who can help you. For example, when I first was contacted by Mark Baldwin at Wildlife Online (linked at the top of this post) he verified some speculation I'd been mulling over in my Badger Mysteries post about whether badgers ever kill pheasants and other gamebirds. Mark showed me research that says- they do! It was brilliant to find out for sure. :) Thanks Mark, and as I always say, if you can give me the answers to any of my questions or you want to correct me on something, then I would absolutely love to hear from you!

And as the Spring rolls in, while you're keeping your eyes on the trees and your ears open for birdsong, don't forget to look down to the ground and keep your nose open too! ;)
Posted by E at 22:39