...Once again, I keep meaning to post more often, and that fungi post is still waiting for me to get the book out and ID them! Plus a lot of stuff has been going on and I've started another new job (last time it was a Christmas job, but hopefully this one will be long term!). But for now, let me share with you an amazing thing I saw a couple of weeks ago.


I went to one of the New Forest coniferous/deciduous enclosures in the hope of finding Siskins and Bramblings, but had no luck, so I'd decided to go back and move on to Keyhaven when I noticed a tree stump that was covered in lichen. 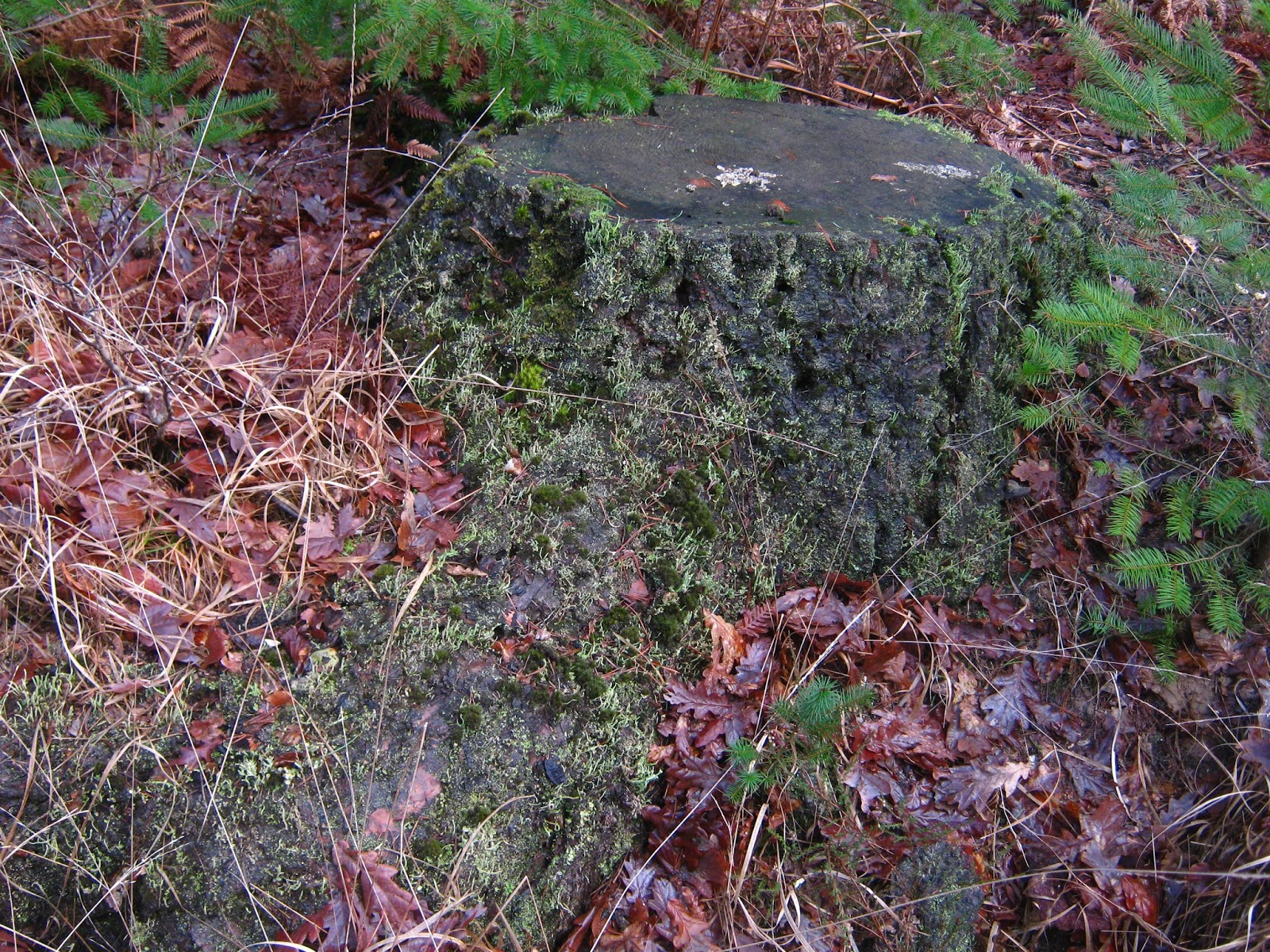 I went in closer for a look, and was amazed by the diversity of structures of lichen on this one stump. And yet I really think they were all the same species, because there were still similarities despite the different shapes.

A large amount of the stump was covered in blunt, branched spikes like these ones: 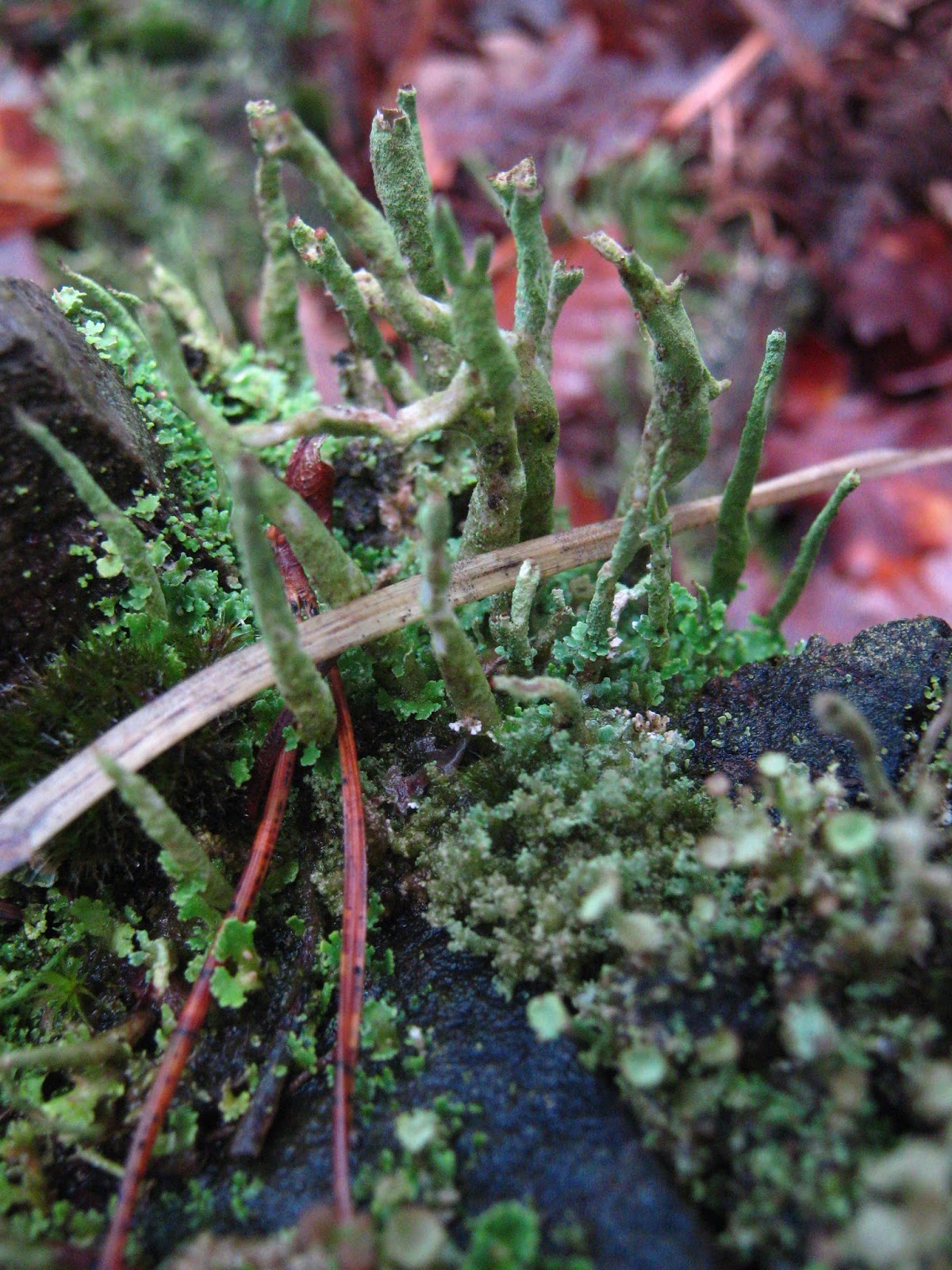 On some, the branches ended in rounded, shallow cups.


And on some of the stalks, the ends were larger and flatter, looking a little like water-lily leaves!


But there was something even more surprising. Look at this photo: 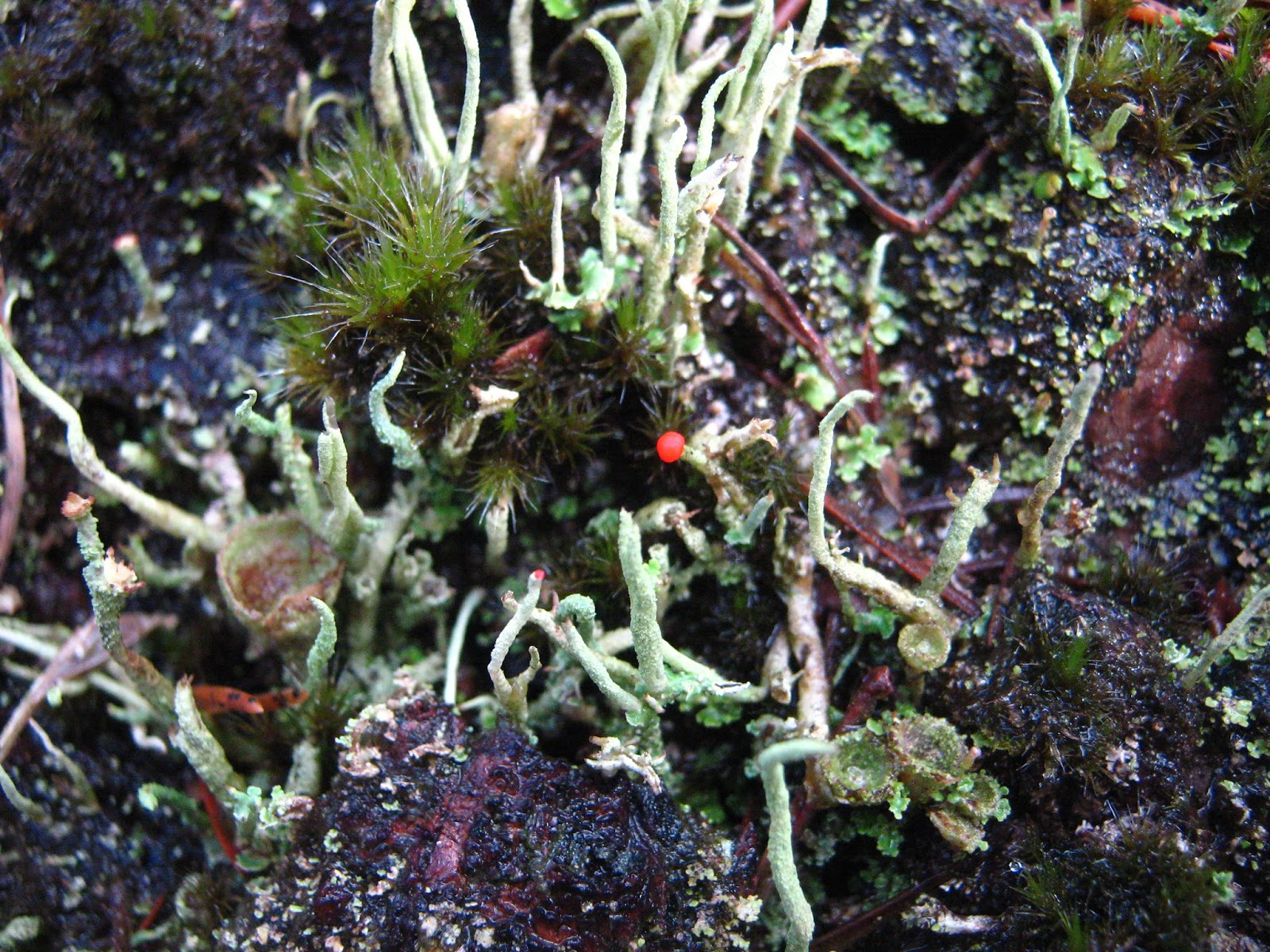 Yep, it's quite distinctive- there's a shiny red globule on the end of one of the stems! What's more, to the left of it you can just see another one starting to appear. I had never seen anything like it. What on earth is it? It couldn't possibly be a flower, could it?


It wasn't the only one either: here's but one of the photos I took of another one that was helpfully isolated on its own so I could get a clear shot: 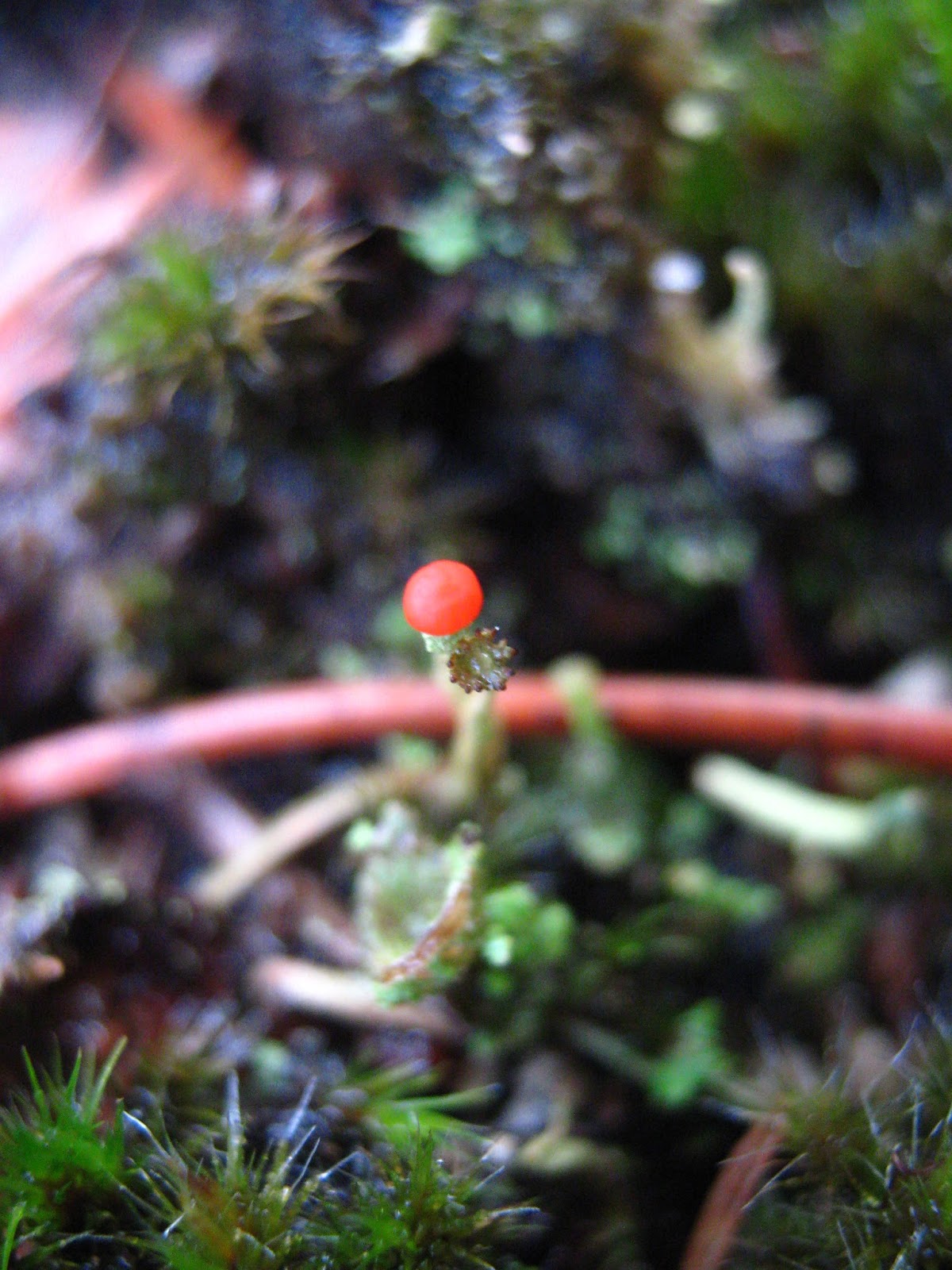 I've seen some weird, colourful fungi, in a variety of textures, but all the lichen I'd ever seen before had been crusty and rough-looking, so this was the first time I'd ever seen smoothness on lichen. Maybe that's why I found this so fascinating, as well as the fact that it seemed so different in colour and texture from the rest of the lichen growths, very like a colourful flower growing from a green stem, only lichens aren't plants and as far as I know don't need to be pollinated, so what is the purpose of the red globules? If anyone knows, or can tell me the proper name for the globules, please please let me know! Part of me is happy reveling in how weird they are, but the rest of me would love to know what's actually going on here. ^^

But that wasn't all! There were multi-growth globules too! 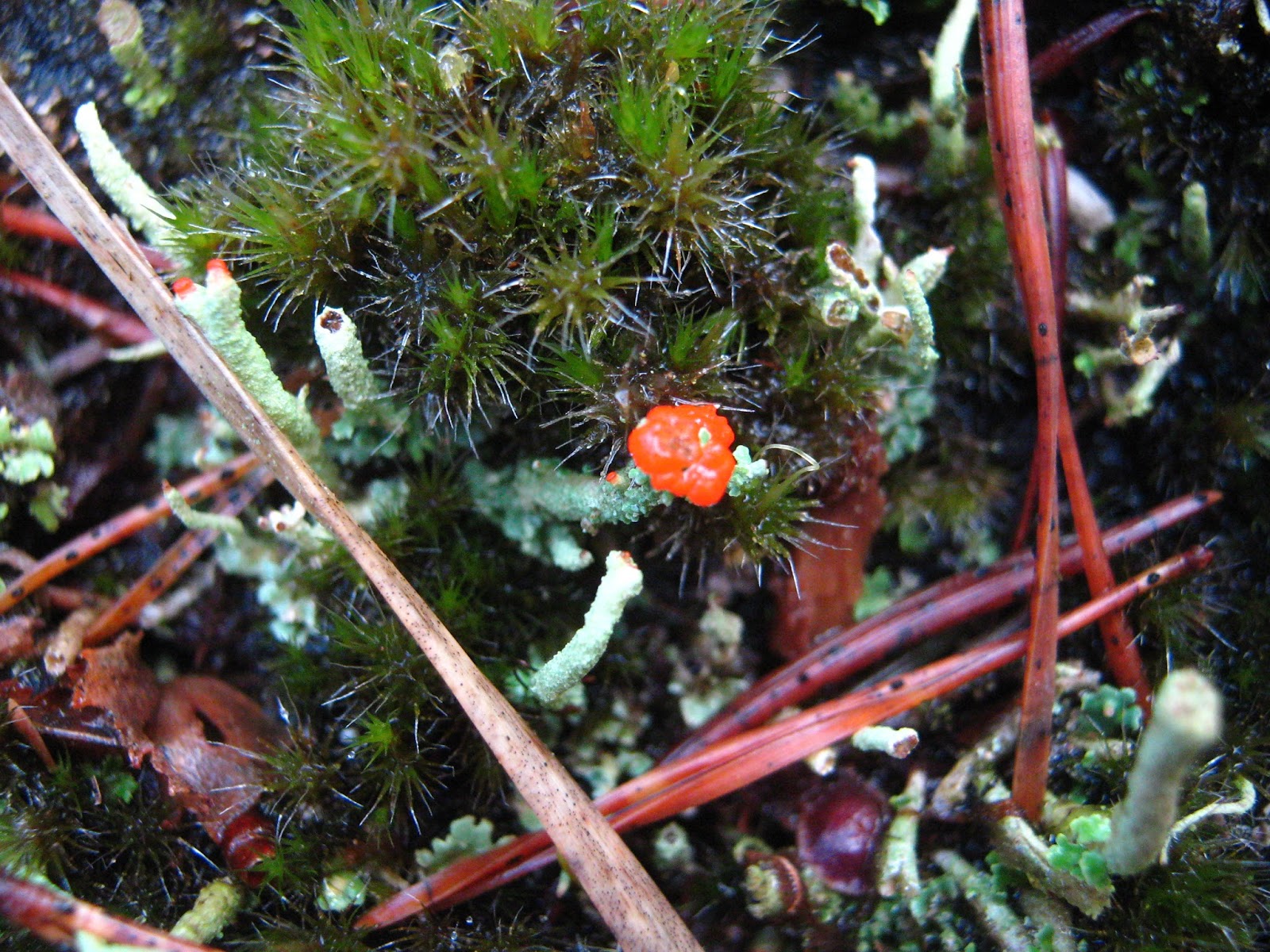 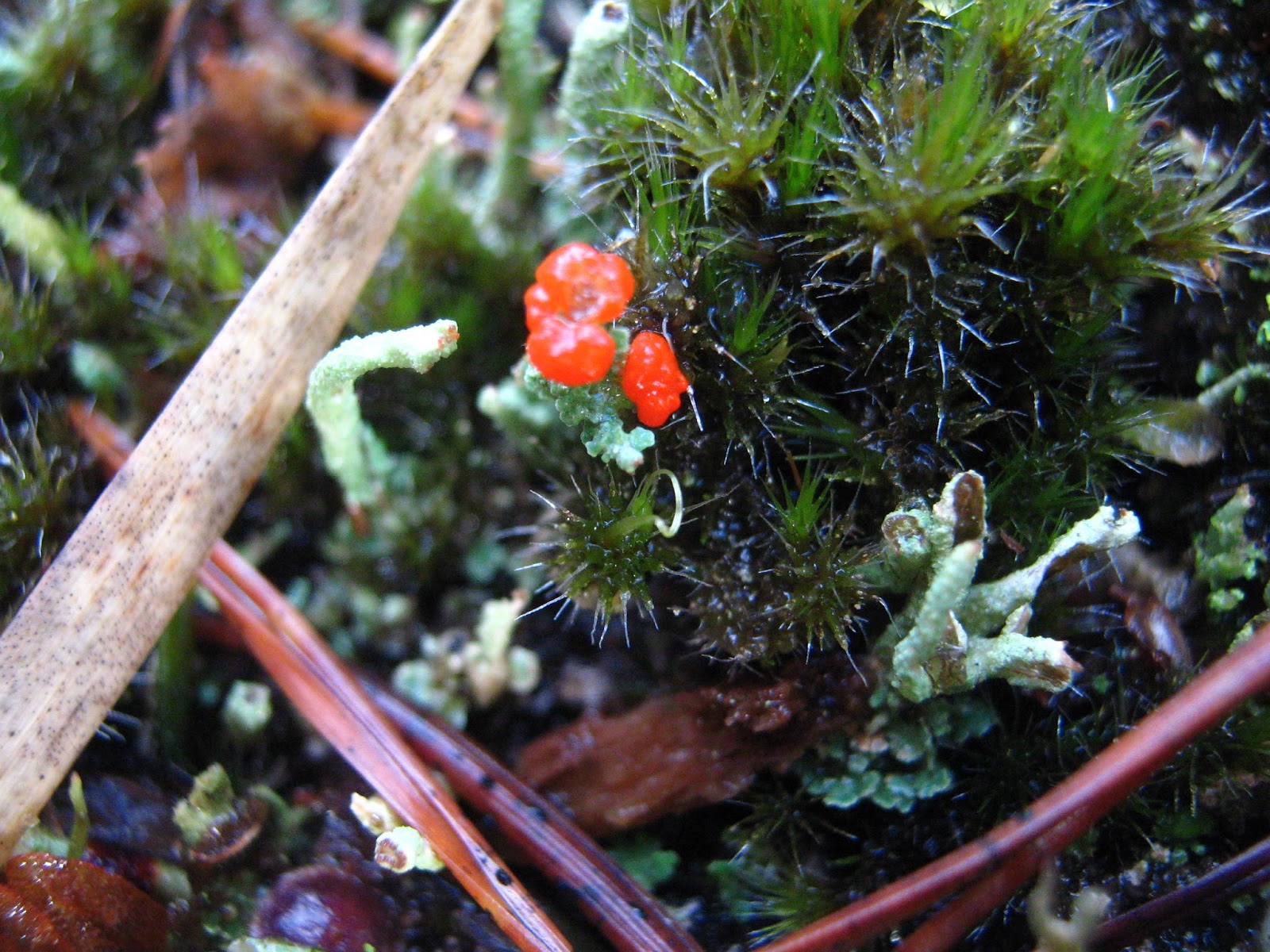 They look so shiny! They also look like they'd be wet and squashy, but I'm pretty sure I tested this out by poking them with something and they actually were quite solid. Whatever they're for, looking shiny must be useful for that in some way!


While trying to identify this lichen, I found this helpful picture guide where you can choose what category you think your lichen best fits in. I decided mine was a Shrubby lichen, and that led me to three species that have red growths: Cladonia polydactyla, Cladonia coccifera and Cladonia bellidiflora. (I think all the species in that section are in the Cladonia family.) Coccifera and bellidiflora had different shapes and textures of branch in the photos I saw, so I'm going to tentatively identify the species I found as Cladonia polydactyla, though I could always be wrong so please do correct me if so! Interesting, the photo the site had of Cladonia polydactyla had red growths on practically every stalk, and the growths also looked less shiny, so I wonder if the one I found was only just starting to grow its red globules, and the ones it did have looked shiny because they were very new, and soon, perhaps by now as I'm writing this, the red globules would be absolutely everywhere? I wish I could see the stump again right now!


As you can probably tell, I not only know very little about lichens but have never really considered knowing more before I found this lichen that interested me so much. I probably should read up more on lichens and find out what the red things are and why they are all coming out now. If I do, I'll be sure to write another post, but for now I'll certainly be keeping my eyes open for lichen like never before!
Posted by E at 22:35