The first baby birds are in our garden! Last Tuesday I was enjoying the newly light evenings and watching the garden when I spotted some wing fluttering and feeding action in one of the trees. A quick look through binoculars showed that this wasn't a male courtship feeding a female, as the bird being fed was reddish-brown and appeared very round because of its fluffed up feathers and almost complete lack of tail. It was a baby, the first one of any species I've seen this year! (The day after I first spotted the Blackbirds, however, I saw the first tiny Mallard duckings in St James's Park!) A closer look showed it had a visible gape, which is the wide, colourful mouth-edge baby birds have in the nest to make their beaks super visible to the parents birds when they come with food. You can see these on all kinds of songbirds.


On a closer look, there were two babies, being attended by the male. One was hunched up and still, and I doubt I would have spotted it if I hadn't seen the male arrive initially, which really shows how quietness and stillness can hide baby birds when their parents are away finding food. The other baby, however, was quite active and was fly-jumping around the tree like anything, it's tiny tail cocked, looking like a giant wren! Interestingly the male visited and fed the still baby three times while I was watching, with the active baby not being fed once, even though at one point it hopped right over to where the male was feeding the first baby and sat there looking expectant. I don't know what's happening there, but I have to say the hopping chick seemed very energetic and healthy so I doubt any long term neglect is happening. Blackbirds are such efficient breeders, they tend to be the first baby birds you see in the spring and starting early means they can often churn out 3 broods in a season, and therefore don't go in for massive clutches, so long-term favouritism in their broods doesn't make sense for them.

The day after seeing the young Blackbirds, I found these in our drive: 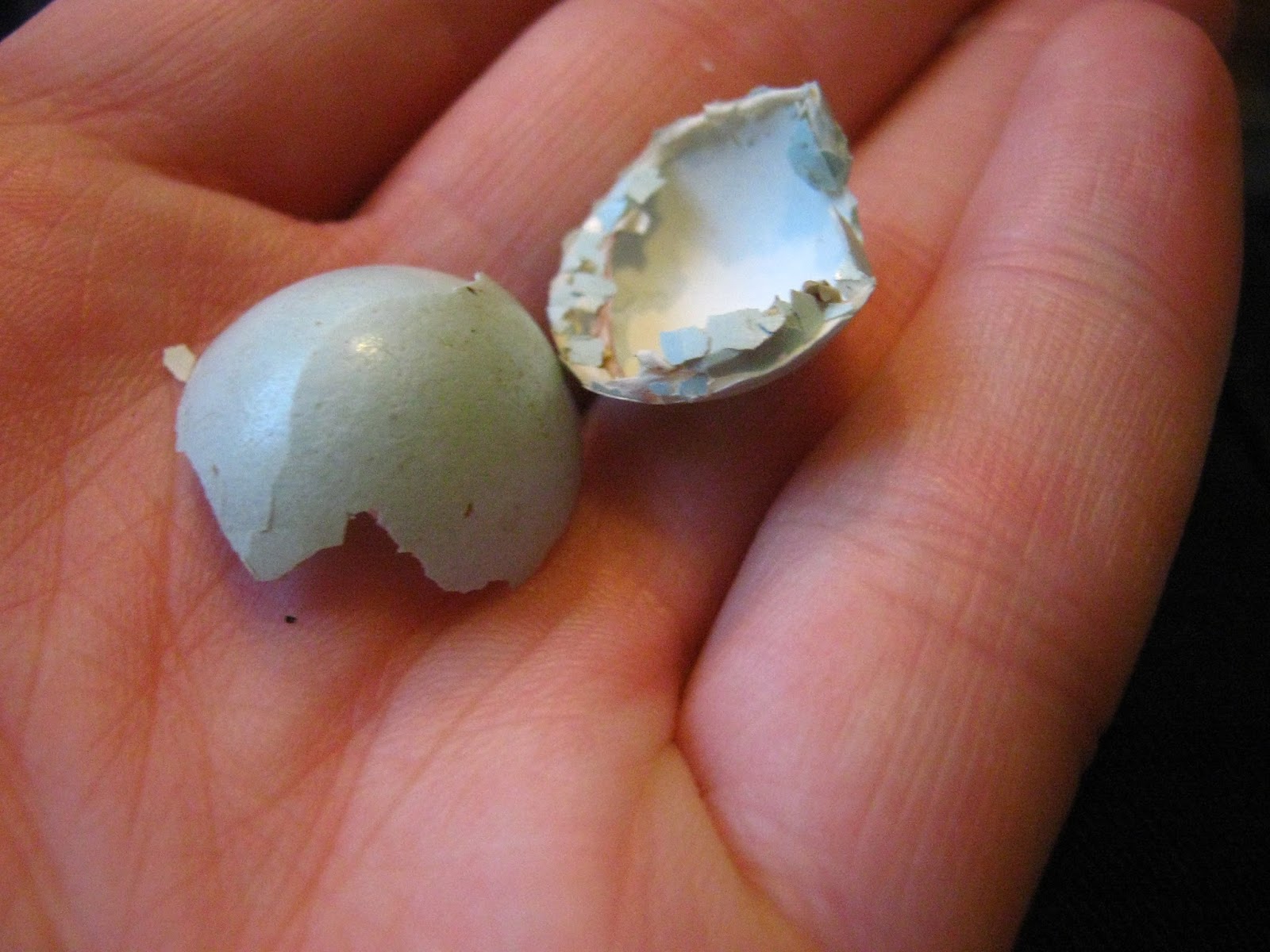 Of course I immediately jumped to the conclusion that they must be the Blackbirds eggshells! But after borrowing my Mum's guide to bird eggs and nests, I found that Blackbird eggs are extremely speckley, and these very pale blue, almost speckle-free eggshells are actually a much better fit for a Starling. This makes sense as Starlings nested under our neighbour's roof tiles last year and we've been seeing them there again. These were actually found surprisingly close to where the nest is, as birds usually take the shells a little distance away to drop them so they don't draw predators to the nest, but at least they weren't directly under it I suppose! I guess here is a possibility it's from Starlings at a completely different site.


This seems a good time to point out the difference between these eggs and the one I found back in January that I guessed had been predated by a corvid. That one had an intact shell except for a big hole in its side. These ones, however, have been cut neatly around the middle! Here's another photo so you can better see what I mean: 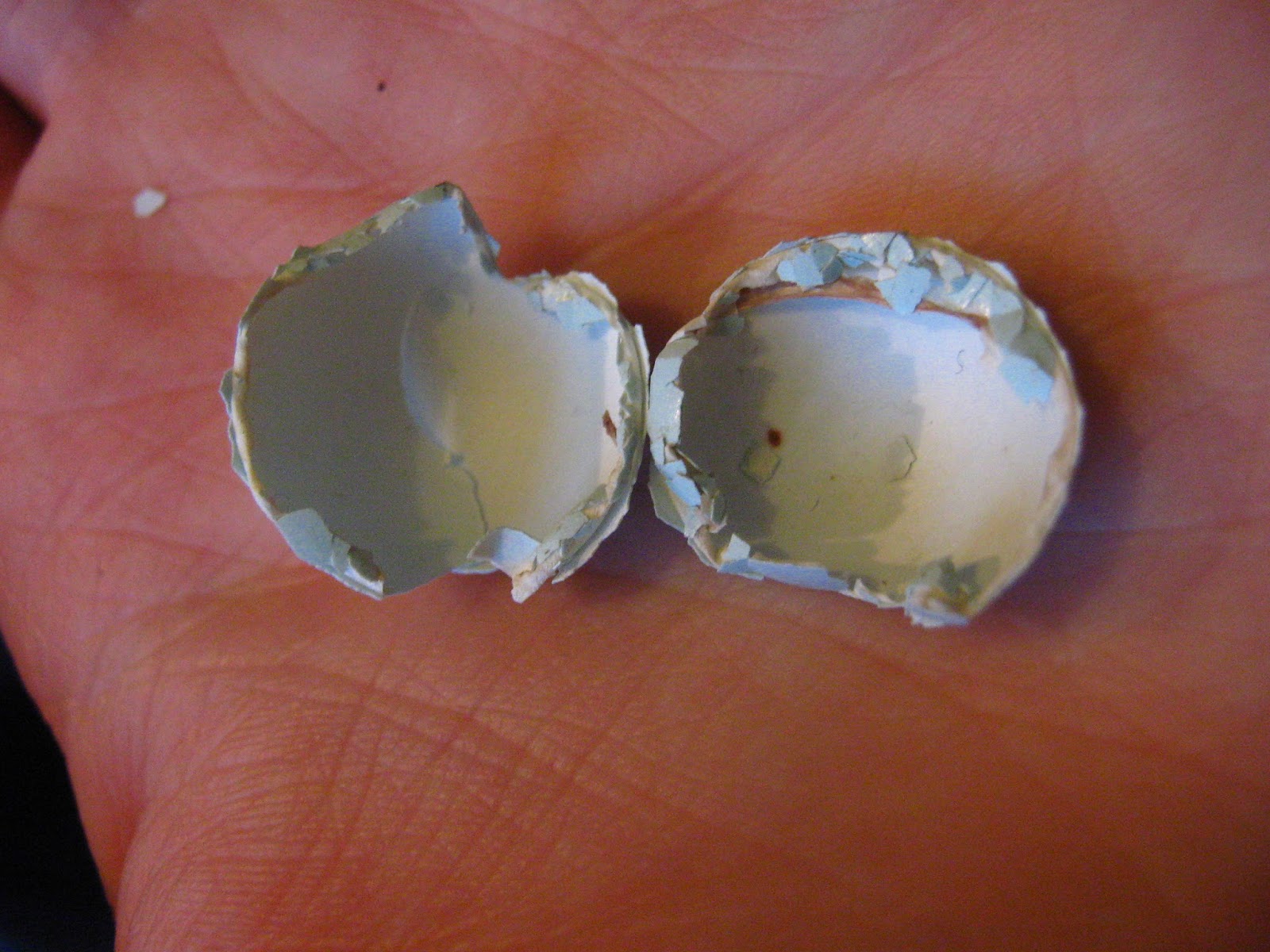 Look at those careful, regular cuts! A tiny bird has cut those using its egg tooth while still inside. Regular halves are a sure sign that you are looking at naturally hatched eggshells.

Forgive the absence of posts recently, I've been working on a costume for an upcoming convention I'm going to! Cosplay and birds are my two passions. :D And I'm also in the middle of a post about a Black-headed Gull colony I sketched at about a month ago, but sketchbook posts take forever to put together and I wanted to talk about baby birds! Have you seen any baby birds yet? If so, tell me all about it!


Now, earlier in the post I mentioned that my Mum has a guide to birds eggs and nests. It's worth mentioning that (as far as I know) you cannot buy these new, because egg collecting has been such a huge thing in the past, it is all kinds of illegal now, but it still happens and the last thing anyone wants to do is encourage it. This is really important, but it can be annoying if you find an eggshell and can't find a book to ID it. My Mum's book was published in the 70s (and was actually published in Czechoslovakia, which I only realised recently and which explains some of the birds included that had puzzled me in the past, like Short-Toed Treecreeper, Crested Lark and Great Reed Warbler, none of which breed in Britain!), and for my last birthday my sister gave me an egg book of my own, which she had found second hand. That, I think, is the best thing to do if you want a book about bird eggs- check second hand shops and stalls, and hopefully you will come across one. Mine is not quite as useful as my Mum's as it limits itself to 'woodland and hill birds', which doesn't appear to include Blackbird or Starling, but it has all the other thrushes, the tits, corvids, pigeons, farmland birds, game birds etc etc so that's all very useful. :) It was also published in Czechoslovakia in the 70s, though the author and illustrator are not the same as my Mum's, which was interesting to spot- maybe loads of bird egg books were coming out of Eastern Europe at the time and being translated? The range of birds is even wider and includes Roller, Nutcracker, Griffin Vulture, Hazel Grouse, Eagle Owl and all that cool stuff! My sister was really on the ball when she bought me that. :D


By the way, though I am a feather collector and have a growing collection of bones (and one deer tail), I wouldn't recommend anyone to collect eggshells because egg collecting is still just too close to home, at least in the UK. Hatched eggshells are very different from ones blown by a collector, but still, I prefer not to go there at all. The ones in my photo were put back outside once I'd photographed them. Bird eggs are beautiful, but they only belong in the wild, and in the UK every single one of them, no matter how common the bird, is protected to the full extent of the law from human intervention. Nests and eggs are more precious than gold.
Posted by E at 20:52