Early Signs of Things to Come!

It's been a milder winter than the past few we've had, and though the nights are starting to get a little frosty it's certainly nothing like last year! This time last year I'd already seen my local patch turn into a snowy wonderland, with unexpected visitors (a huge flock of Lapwings and a smaller one of Golden Plovers!), and my garden was awash with colour as Bramblings and Siskins mingled with the Goldfinches, Chaffinches and Greenfinches! This year the winter finches have yet to arrive, if they will at all (though we have had some small flocks of Redwings visiting, and the odd Fieldfare!). At my patch, the stubble fields are covered with flocks of Redwings, Fieldfares, Skylarks and Chaffinches. I don't remember ever seeing so many birds feeding on them!


The mild weather has meant that I've been hearing and seeing more signs of Spring everywhere, and though I know we may still get a cold snap it is certainly interesting to see how the birds and plants are behaving. Birds are singing, bulbs are sprouting, catkins are on the trees. In December and early January I heard a Great Tit singing, saw two Robins in the same personal space without a fight (a sure sign of a potential pair!), and heard a Skylark in song-flight, though his song was not as advanced and detailed as it will be in a month or so. Meanwhile a Blue Tit has been thoroughly checking out our garden nest box, mostly perching outside and looking in but popping in a couple of times too. I've seen Black-headed Gulls whose heads are almost completely brown again (the name is a misnomer, the head is chocolate brown!), while some are still in their winter plumage. I wonder what causes the difference?


My garden is part of the territory of a male Song Thrush, who has been singing every morning and evening since before Christmas. Sometimes he's outside the garden, though the distinctive, repeating song is far-carrying and can always be heard clearly, but when he's in the garden I've been able to get some sketches. This one is from December. 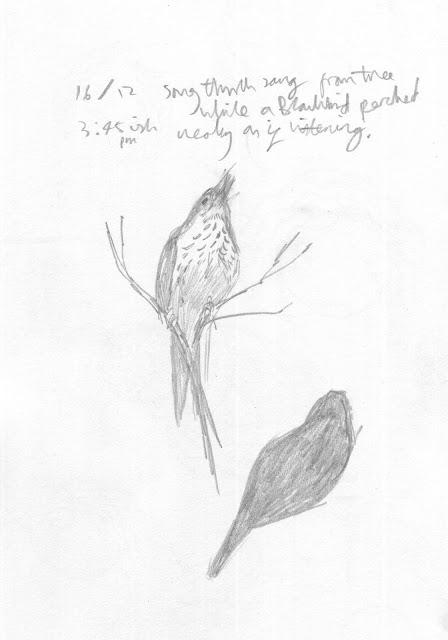 He sits at the top of the willow tree and sings his little speckled heart out. As you can see from my fanciful notes, an I think female Blackbird was sitting nearby and seemed to be listening! But who knows what was really going on. I watched him hop up the tree, making a few song notes, before choosing a good spot to sing, not quite at the top of the tree this time but near it. He began to sing, turning his body every half minute or so to aim his song in different directions. One thing's for sure; male Song Thrushes in the area will know for sure that this territory is Taken! He moved out of the garden after about 10 minutes, but he continued to sing elsewhere.


As I mentioned in my New Years post, I recently heard a Grey Wagtail sing for the first time-that was this winter too! I was watching a watercress bed in Alresford when a Grey Wagtail landed on it and began to hop about. Soon it began to sing, while still perched on the ground (which makes sense as Grey Wagtails spend most of their time on the ground, but how many birds sing from the ground out in the open? Most sing from a tree, from cover, or from flight, so it was unexpected for me, especially as I hadn't realised Grey Wagtails even had a song!). Then another Grey Wagtail suddenly appeared and shooed the singer away! Both birds had white throats, which adult winter Grey Wagtails all have (while breeding males have black throats) but for most birds (except a few Black-headed Gulls apparently!) it's far too early to be in breeding plumage, so I suspect these birds were both male, and the second bird already owned the territory and was making that clear to the singing bird. Though anyone who knows more about Grey Wagtail behaviour, please do comment and correct me! There may be something I don't know about female behaviour.


Just before the end of last year, I also saw courtship behaviour in Nuthatches for the first time! I spotted two Nuthatches up in a tree, and then noticed that one was pursuing the other, up and down the trunk and from tree to tree. Then one bird began to dip its head exaggeratedly (but considering how big a Nuthatch's head is compared to it's body, most things it does with it seem exaggerated!) while the other bird started to wing-flutter, like a baby bird does when it wants to be fed. I've written about this behaviour before, in both Blue Tits and Carrion Crows, and how it is a commonly seen courtship behaviour in female birds, so it was clear that this was a female and the head-dipping and chasing bird was the male. He then began to sing- Nuthatches have such a strange song, if you ever hear something that sounds like a car alarm going off in a wood, it'll probably be a Nuthatch singing!


These birds are probably not planning on making nests just yet, but they are establishing pair bonds, territories and nest sites, so they can be all ready for when it really is the breeding season! If you have also seen or heard birds or other wildlife doing these behaviours, please write me a comment and tell me all about it! :) Meanwhile, here's a post from Chris R, also based in Hampshire, about noticing birdsong, woodpecker drumming, Buzzard courtship behaviour (which sounds similar to what I described at the end of this post), and honeybee activity this new year: http://fourmarksbirding.blogspot.co.uk/2014/01/11th-january-and-i-say-its-all-right.html Enjoy!
Posted by E at 13:54