Amorous Activities in the Pigeon Family

This is sort of a continuation to my last post about early signs of Spring caused by the mild winter, but only sort of, as hopefully I will show! On a walk about a week ago, I found this: 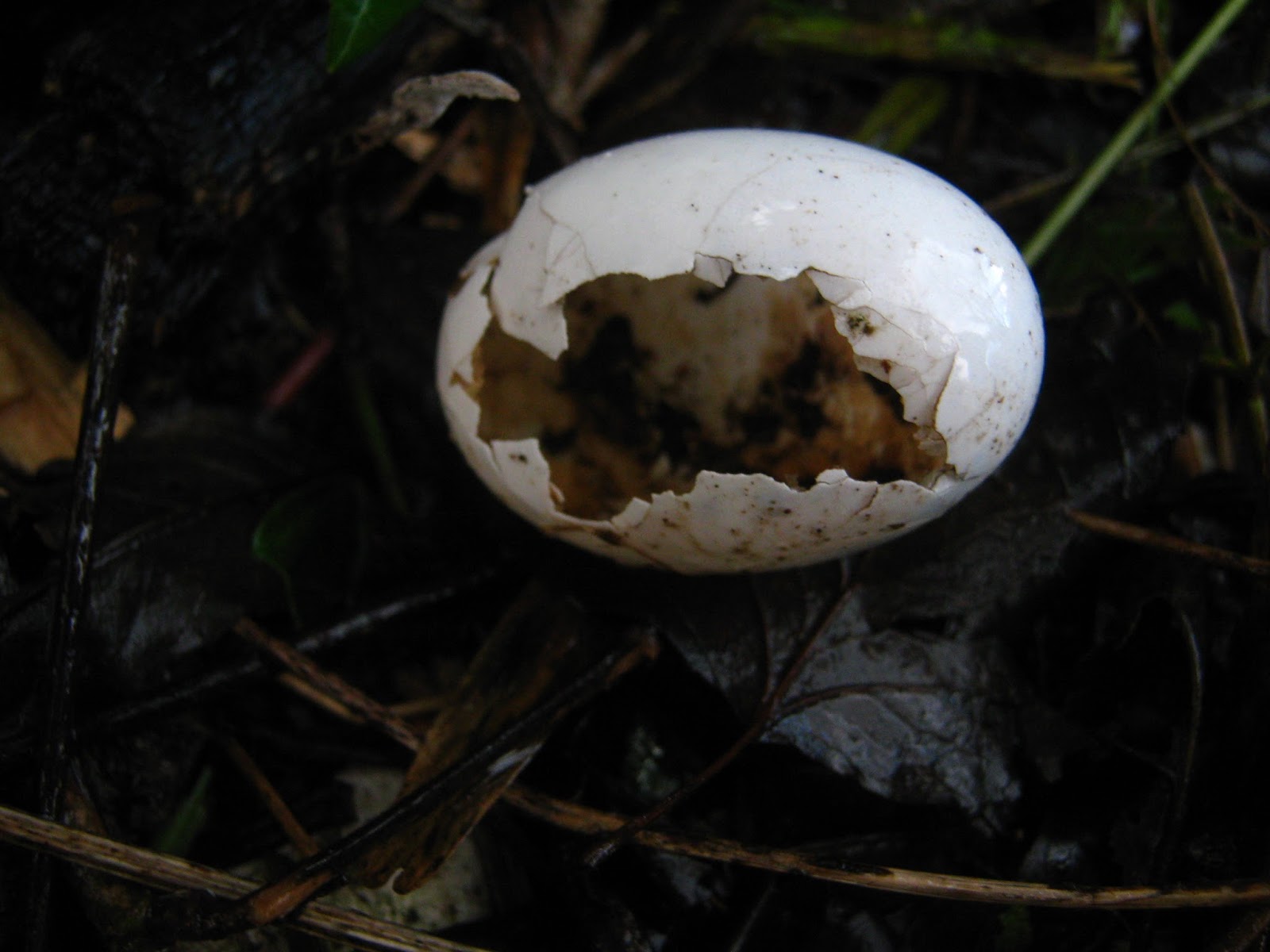 This is a Woodpigeon's egg, which has been predated. If it had hatched naturally it would have broken into two halves due to the way a baby bird pecks around an egg to escape it using its egg-tooth. And according to my trusty Helm Identification Guide 'Tracks & Signs of the Birds of Britain and Europe', a predator such as a weasel would smash the whole egg up when it ate it. The hole in this otherwise intact eggshell shows that it was predated by a bird, such as a corvid.


The reason I said that this is only sort of a sign of early Spring is that Woodpigeons (and other pigeon species such as Collared Dove) are known to breed at all times of year. They can do this because, unlike most passerines, they can regurgitate food to feed to their babies in a substance known as pigeon milk, meaning as long as there's food for the adults there's food for the babies. Other species of birds, such as Blue Tits, need soft food such as caterpillars and insects for their babies, so they have to breed at the right time of year for that food.


However, weather still matters and I doubt Woodpigeons would have been breeding last January. It was just too cold. And even with this year's mild winter, if this egg hadn't been predated I wouldn't have expected it to survive. Woodpigeons build very basic nests of just a few twigs in a tree, and it's been SO windy and rainy this winter that the nest would have probably blown down.


Speaking of breeding behaviour in the pigeon family, today I was looking out into my garden and saw a pair of Collared Doves start mating! Then, as if that wasn't enough, only a few minutes later there was a pair of Woodpigeons who also began to mate, but this time I got the chance to see a little bit of their courtship too. What first drew my attention was one pigeon began pecking at the beak of the other, and then stuck its beak right inside the other's; it was being fed on pigeon milk! I'd never seen anything like it before. I guessed the one doing the feeding must have been the male, and sure enough when they began to mate it was this bird that jumped on top. Before mating they sort of snuggled up together, with the male puffing up his breast feathers to look bigger.


I've talked about courtship feeding before, and how I've seen females in both Blue Tits and Carrion Crows use a wing-fluttering display to show they want to be fed by the male. The female pecking the male's beak was different though, and reminded me more of the Herring Gull chicks when they pecked their parent's beak on the red pecking spot to get them to regurgitate. Only in the case of the adult Herring Gulls, they were regurgitating a large lump of food onto the ground for the chicks, while the Woodpigeon behaviour I saw suggests that their young take food straight from the parents' beaks. Well, the name 'pigeon milk' does suggest liquid! The male Woodpigeon was showing the female how well he'd be able to feed babies when it came to the time, as well as how well he would feed the female while she was laying and incubating. It looks like more eggs are coming in the future, so let's hope we don't get any more storms!


Woodpigeons are such fascinating birds to watch, especially as you can often observe their behaviour very closely when they are in gardens and parks. We have a ground feeder in our garden and I've noticed how dominant Woodpigeons have a sort of 'lurch forward and wing-flap' gesture that they do to scare off other birds feeding on it. Or at least, it's supposed to! It works on other Woodpigeons and on Collared Doves; they all back off. But Starlings tend to ignore the gesture completely! Starlings may be a good bit smaller than pigeons but they aren't easily intimidated. And perhaps pigeon body language doesn't translate well outside the family?


I hope I'll have the chance to write more about Woodpigeons in the future, because I've seen all kinds of interesting interactions among them. I've seen them squaring up, bowing to each other, standing up as tall as possible, mimicking each other's behaviour...what do these behaviours mean? To guess at that I'd need to watch them more closely, which I plan to do in the future. Since writing this blog I've started watching bird behaviour more closely than ever before, and I feel like I'm finding out new things all the time! As always, please do submit stories of your own about bird behaviour- have you seen any pigeon courtship this winter? If so, leave me comment and tell me all about it! :)

This is unrelated to pigeons, but on the same walk that I found that eggshell, I saw this: 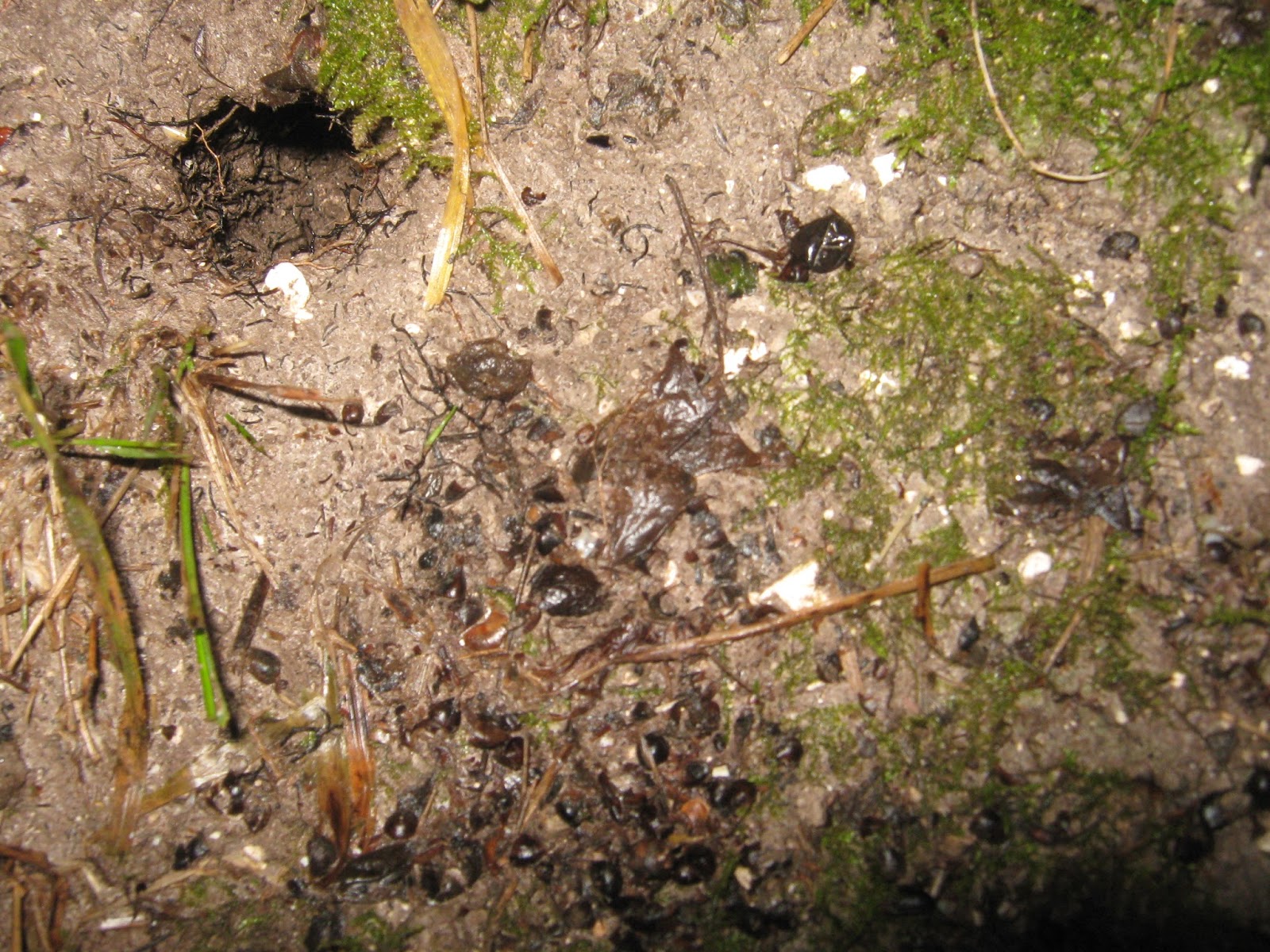 On the left is a small animal hole (I'd say the photo is about actual size), and in the middle and bottom you can see the shells of seeds. I don't know what species lives here but I'm sure its either a mouse or a vole, as they both eat seeds. Leaving all the seed shells outside reminds me a bit of our hamster, who tends to spit his empty shells outside of his bed! Of course a small animal that lives in a hole doesn't really need to hide its seed shells, as it is safe inside and the hole is so obvious anyway.

And finally, and back on the pigeons, here's a slightly disturbing pop cultural reference to pigeon milk! I'm a big fan of the game series Animal Crossing, in which there's a pigeon character named the Brewster who owns a coffee shop. After you get to know him a bit, he offers you some pigeon milk to put in your coffee. Um........:O

Someone in this game's development had a sense of humour alright!


...But as you can see from the picture, in the game your character seems to really enjoy the pigeon milk-infused coffee. So I guess it's not so bad!
Posted by E at 17:48