Confusing Fungi, and Some Fungi Resources!

Hi everyone! I know I said in my New Forest and Blashford Lakes adventure post that I'd write about fungi I saw on that trip the next day, but my new job turned out to be more exhausting than I thought so it's had to wait till now. Sorry about that!

First I have a bit of a confession to make: you know that other fungi post where I said I'd always bring a camera in future? Well, the other week I went on a wildlife detective-y expedition where I photographed some fungi, and for some reason it didn't really help with IDing them, or maybe it was that photographing them made me put off IDing them for longer. So it seems there is no perfect way, unless maybe I can get hold of a smaller guide to fungi that I can take out on trips! Anyway, I didn't take any photos of the fungi I saw, partly because I thought it might not help, and partly because all the birds going on were so interesting I was absorbed in watching them most of the time. And I'm now regretting not taking photos, as you'll see later.

The first fungus I found was a really quite pretty one that presented no ID difficulties when I looked it up later. I found it on the heathland where I saw the shrike, and it was a single round, flat one growing straight out of the ground, with concentric circles in different shades of golden brown. I identified this as Tiger's Eye, which I'm confident about not just because the picture in my book looked like it but also because the habitat description was so spot on: 'on heaths, usually on sandy soil'. This one was definitely on a heath, and the ground in that particular part was elevated above the boggy area, with sand visible on the paths. Well that was easy! What's next?

My next find was a piece of horse manure with tiny, white mushrooms growing out of it. Going through my book, the closest I could find was the Nail Fungus which fitted the description, in that it was very small (and I mean very, very small, each fungus no bigger than a few millimeters across and no more than a centremetre tall), pale coloured, and round-ish or oval shaped. And most importantly of all, it was described as growing out of horse manure. The only problem was the book described it as on the Red Data List for conservation, meaning it's rare, and as a novice I usually go for the commoner option, on the grounds that it's more likely to be that, unless there's a very good reason.

I did some googling to try and find out about fungi that grows on horse manure, and found this post which says that only 8 types of fungi grow on horse manure, and lists them all. I've looked them all up, and none of them are even close to being what I saw, except the Nail Fungus. (note: I think that post is American, but all the ones they list except 2 and 7 are in my UK fungi book, and I doubt the UK has more fungi diversity than in the US, so that suggests there are only 6 species in the UK, though I'm happy to be corrected.) And then I found this very useful resource (Hampshire only, I'm really sorry everyone else! Maybe there's a similar thing for your area?) where you type in the Latin name of the species and it shows you where it's been recorded- my book is for the whole of the UK, so it's really handy to know if a species could plausibly be found in the area I thought I might have seen it, though these things rely on people making reports so it's possible some common species are not represented very well. Anyway, I typed in the Latin name for Nail Fungus, and it showed a very large number of locations its been found, mostly clustered around the New Forest area. I suddenly realised that a fungus that grows on horse manure probably became rare because there's not a lot of horse manure about any more, but the New Forest would be the perfect place for them because of the New Forest ponies, which are owned by people but roam freely throughout the Forest, and pay a key part in the Forest ecosystem by grazing it. There's also strongholds of Nail Fungus in places like Dartmoor and Exmoor, home of the Dartmoor and Exmoor ponies, which makes perfect sense.

The only problem was that when I did a search for more images of Nail Fungus (by the way, don't do a search google image for just 'nail fungus' if you don't want to see a lot of gross pictures of toenails! Search for the Latin name Poronia Punctata or add something else to the search) they looked a little bit different from what I remembered seeing. I've done some sketches to try and show this. 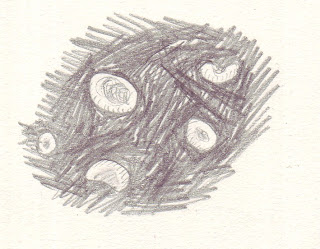 This is what I remember seeing- tiny flat white-ish fungi with a little dip inwards in the middle. This is probably about actual size, and the dark bit is supposed to be the manure!

Now here's what most of the image search results I got looked like: 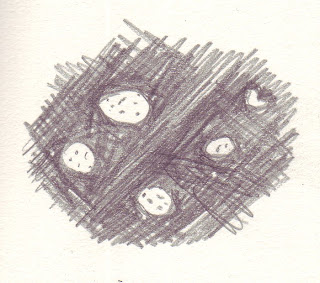 Those little dots on the surface of the fungi are diagnostic, apparently. Though in the pictures some of the smallest ones had no dots and a dip in the middle. This is where a photograph would have come in really really handy! From now on I will definitely photograph any fungi I find when I'm out looking at wildlife. It's possible the dots were there and I didn't notice them because I didn't know I was looking for them. Or maybe they weren't there at all and I'd actually found a different species. If anyone who reads this knows about fungi that like to grow in horse manure, please please get in touch and let me know what you think this could be Nail Fungus based on my descriptions and terrible diagram! ^^

My general thoughts are that it probably was Nail Fungus that I found, because there just aren't many different kinds of fungi that grow on horse manure, but without a photo I can't report my sighting because I can't be 100% sure. Oh well, next time I'll make sure I use that camera!

While at Blashford Lakes I found a couple of other interesting types of fungi. The first were puffballs, only they had burst open so that they looked like birds eggs on the ground that had been pecked open! I've talked about puffballs before and how they want to be stepped on to spread their spores, but if they aren't they will eventually harden and burst open on their own. My book has a picture of a Meadow Puffball that had burst open like the ones I saw, so right now I'm thinking it was that that I saw, but I can't be sure because there's loads of types of puffball and they look a lot alike.

The second was some very large bracket fungi, maybe a foot across each. They were about the same colour as the tree bark and a similar texture too, but underneath they were a very contrasting smooth, clean white. The most distinctive thing about them, though, was that the top of each fungus and the area around it were all covered in spores. Back in this post I mention a big bracket fungus that had covered the wood around it with white spores, but this fungi I looked at the other day was different- its spores were brown, something I'd never seen before. I've tried to draw what I remember it looking like. 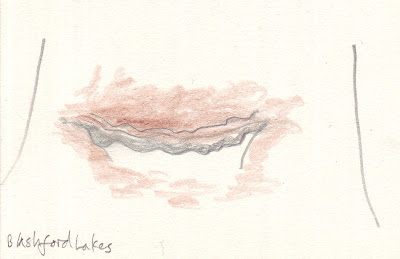 (that's supposed to be the tree around the outside, I could probably have added some lines to show bark texture. ^^) I tried to get a similar shade of brown as the spores were.

I thought this one would be quite easy to identify because of its distinguishing features-large; contrasting white underneath; brown spores- but it wasn't because the pictures in my fungi book don't as a rule show the fungus in its habitat, which means the photos don't include things like spores released in the general area. In the end I googling something like 'bracket fungus with brown spores', and eventually found this from the Kew Arboretum blog, which shows the fungus I found in the 5th picture down. Only the caption of the photo only gives half of its Latin name, so I had to use my book too, but it narrowed down the search because I knew which family of fungus it's in- and soon I found out that this fungus is Ganoderma Pfeifferi (Boo! No English name!). I'm really chuffed that I saw this fungus because apparently it's not very common. Of course it makes sense that such an interesting ecosystem as the New Forest, and such a great nature reserve as Blashford Lakes, would have more unusual fungi to see!

I had to do quite a bit of research to find out what the fungi I saw were, so I decided to include some of the resources I found in this post to help other people. Some of the links are in the post above, but I'm including them all in a list as well to make it easier to find them.

A photo gallery of British fungi species, from the Wild About Britain website: http://www.wildaboutbritain.co.uk/pictures/showgallery.php/cat/8 (it's a really, really big photo gallery, just to warn you!)

If you're from my neck of the woods, here's the tool for finding where fungi is distributed in Hampshire, from the Hampshire Fungus Recording Group: http://www.hampshirefungi.org.uk/fungi.php?name= (if you don't know the Latin name of your fungus, Wikipedia will have it!)

Here's the post from the Kew Arboretum blog that I found useful: maybe you will too? http://www.kew.org/news/kew-blogs/arboretum-team/Fruiting-bodies.htm

And the book I use is Mushrooms by Roger Phillips, published in 2006 by Macmillan.

As I research fungi further and hopefully find more useful resources, I'll post them at the end of further blog posts and tag it 'resource post' so you can find them easily. At some point I'll probably make a resources sidebar, but for now this will be a good start. :) If you like, let me know about your fungi finds and any confusing ID situations you have had!
Posted by E at 22:54