Yesterday I looked out into the garden and saw a female Sparrowhawk plucking a large kill on the patio, less than 5 metres away!  At first I thought the kill was a Collared Dove but then identified it as a Woodpigeon.  All the drama and movement of the kill had happened completely without me noticing.  Worried about putting her off her kill, I very quietly crept away and went upstairs to my room, from where I could watch her, and sketch.  All my sketches are from a slightly above angle because of being upstairs. 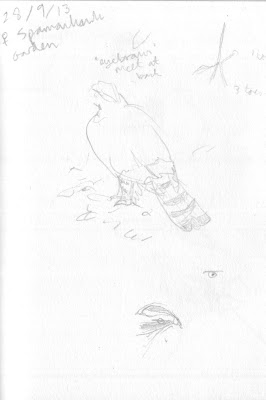 I wanted to look in detail at the Sparrowhawk's feathers.  In this sketch you can see that the tail has a thick band of darker grey at the end (with a very thin stripe of white right at the end, but my sketch isn’t that detailed!) and 3 bars across the middle of the tail.  The white ‘eyebrows’ over her big yellow eyes curve round to meet at the back.

The female plucked her kill busily for a while, though she never stopped flicking her head this way and that to check for danger in between beakfuls of feathers.  Then suddenly a male Sparrowhawk seemed to appear out of nowhere, about a metre and a half away from me on the roof of our garage.  This bird has been a regular visitor to our garden for the past week (the female was a newcomer), and he’s a particularly colourful bird with deep orange eyes, red cheeks and red barring on his breast, and even his tail feathers seemed to have an orange glow in the sun.  As soon as the female saw him, she opened her wings and spread her tail to mantle her kill so as to hide it from him, and glared at him with a terrible, yellow stare. 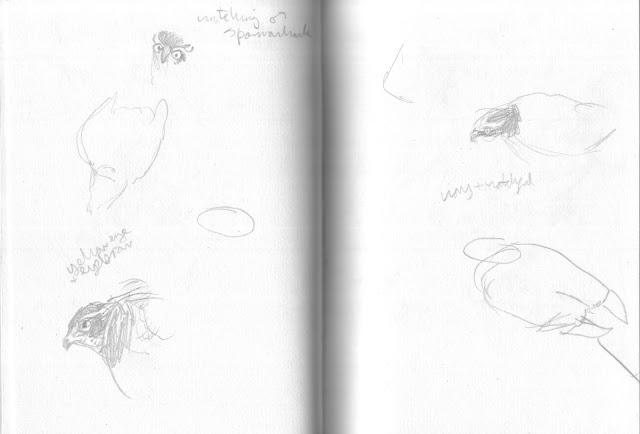 While fixing him with her gaze she was very still so I was able to get a sketch, which you can see in the top left of this page.  It was quite something to see.  The male was absolutely not going to get any closer.  A little male hawk about the size of a Collared Dove was not going to approach the big broad female, bigger than the Woodpigeon she was eating.  He didn’t stay long, flying away in the direction he came, and she kept mantling for a little while before digging her talons into the kill and flutter-jumping onto the lawn, moving the kill a few metres away from where she plucked it.  Perhaps she worried the male would come back and attempt to steal some of the kill.