Life and Death in Wales part 2- The Gannet


On the first day of our holiday in Aberdovey, we went to the neighbouring town of Tywyn where there’s a lovely beach.  I did what I normally do at the beach, which was have a nice swim in the sea and then do a bit of feather collecting on the shoreline before lazing around reading.  But this time I saw something I’d never seen before.  My brother told me there was a dead gull floating in on the tide, but on looking at it I saw it was a bigger bird altogether- a beautiful Gannet. 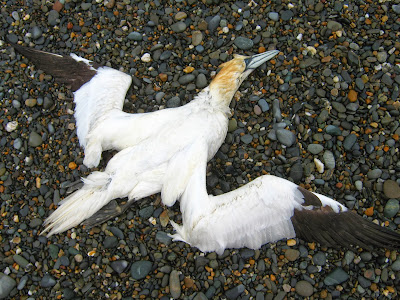 We waded out into the water and pulled it to the shore so we could have a proper look at it.  It was in beautiful condition, with no noticeable signs of injury.  Gannets have an impressive wingspan that can be almost two metres wide, so I tried to spread the wings to get the full effect, but it was hard to do, the wings so stiff with powerful tendons that I couldn’t open them to anywhere near the full gliding position. In my photo you can see the rows of wing feathers, and the way the white feathers are translucent where they lie over the dark feathers. 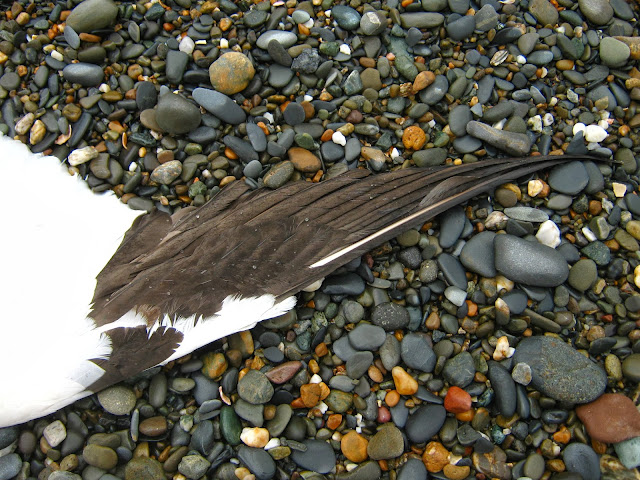 Before I saw one this close I never realised adult Gannets have a dark area of feathers on their wings that is separate from the black tips; I think it's the Gannet's alula that is dark- the feathers at the bend of the wing on the leading edge that are used for steering- but I'm happy to be corrected as that's just guess.  From a distance you can't see that at all, so I was surprised.  You can see how powerful and strong the feathers are, and also that they're not as black as they look from a distance but are actually a very dark brown, and shiny. 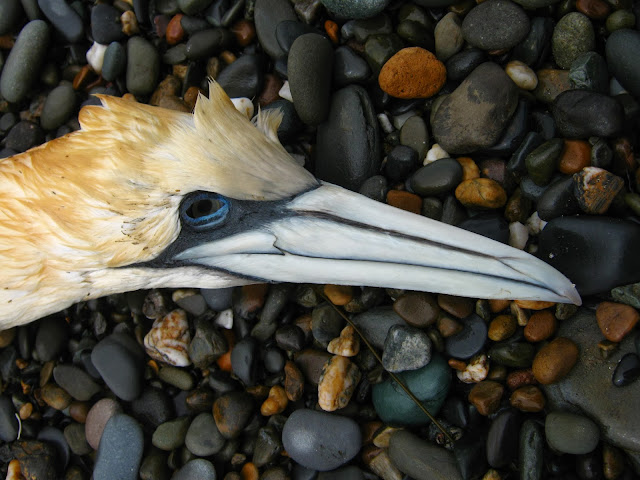 Here you can see the blue area of skin around the eye, which is still present in its socket.  Because of this, I think the Gannet must have been dead only hours.  It's really sad to see one of these wonderful birds dead, but from its plumage you can tell the Gannet is at least five years old, as younger birds have dark spots in the white areas of their plumage- I've seen ones in various stages of sub-adult plumage, mostly from ferrys.  So this one at least had had a bit of a life!  You can also see the complicated pattern of plates that make up its beak. 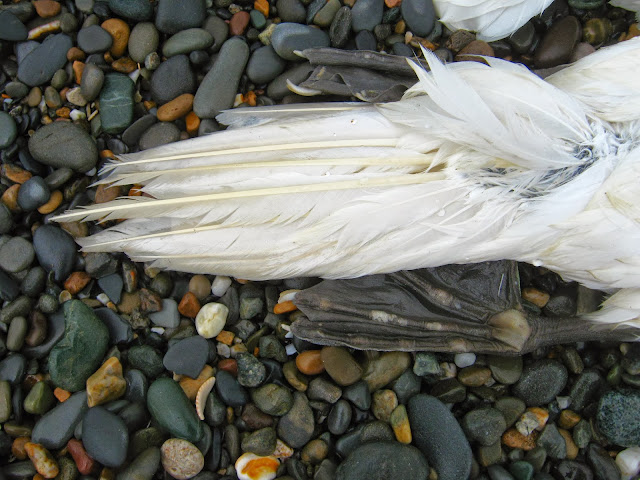 Here are the strong, thin tail feathers, and the oddly shaped webbed feet and clawed toes.  There's a bit of damage to the feathers at the base of the tail, but I don't have any idea what could have killed this Gannet.

At Twywn beach in the summer you can see Gannets passing across the sea often, and it's always wonderful to watch them.  They are one of our biggest and most distinctive seabirds, and are more seafaring than gulls or terns.  When you go out into, say, the Channel, you'll stop seeing gulls and terns very quickly, but you'll see Gannets throughout the crossing.  I love their steady flight over the sea and their distinctive white wings with black tips, and the way they dive to fish.  It was sad to find this dead one but also a fascinating opportunity to look at one close up.
Posted by E at 22:53