If you're reading that title and thinking 'aren't we a bit past nest building season at this point?' you'd be right! The nest building happened in early May. But it was so amazing that even though it was over a month ago I couldn't not write about it. I have posts cooking up in my brain about wildlife things that happened years ago. Who knows when they'll get written?

The Little Grebes were at Blashford Lakes and their chosen nest site was in front of the Goosander Hide right near the Sand Martin nesting wall, in a branch that had been deliberately put there by the reserve maintenance team. My mum and I thought it had been put there to encourage nesting of water birds, but according to the reserve blog it was put there to give baby Sand Martins somewhere to swim to if they fell from the nesting wall on fledging. But it was certainly appreciated by the Little Grebes, who already had a nice pile of sticks and weeds built up, though it was far from finished. When we started to watch both members of the pair were working hard, bringing more material to the nest. 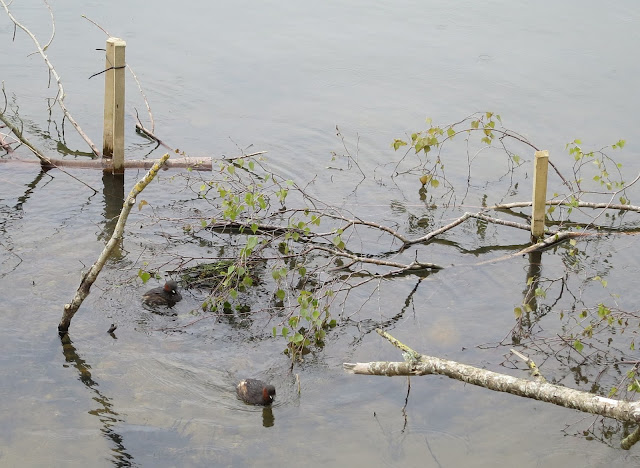 Nearby, a pair of Great-Crested Grebes distracted us by starting the first stage of their courtship dance! (no photos of that I'm afraid, I only got the Little Grebe photos by being about 5 metres away from them.) The dance starts with a head-shaking display where the birds mimic each other and take turns shaking the plumes on their heads. But suddenly a bunch of half-grown ducklings began milling around them! The grebes were distracted, stopped the display, and one of them carefully shooed the ducklings away. (I may be making this up but could the grebes have been gentle with the ducklings because they were worried the mother duck might have had something to say about it otherwise?) Sadly they didn't start dancing again, and instead swam away together. I watched for a long time to see if they'd start again, as it was only the second time I'd ever seen the mimicry stage of the courtship, and I've never seen the second stage (where they stand up on the water and offer each other waterweed). They didn't, sadly, but the Little Grebes were more than enough to watch!


The Little Grebes were having trouble with the ducklings too, coming closer to the nest than one of the pair felt comfortable with. The ducklings and the grebes were about the same size, but this grebe had no fears about seeing the ducklings off, and driving them back towards the bank were their mother was. Once the grebe was satisfied they were well and truly out of the way he had a quick fishing session, diving over and over and swallowing several tiny silver fish. But then the other grebe began to call, in a series of surprisingly loud notes, and he came back. 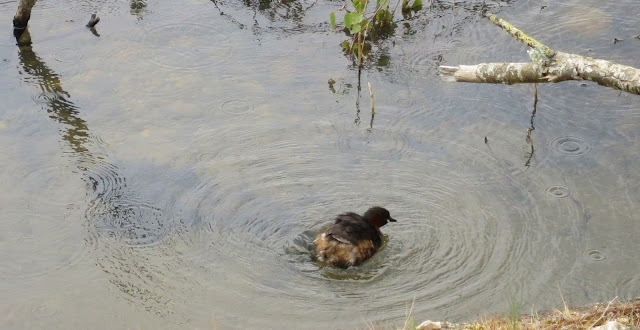 Here's one of the grebes having a little wash. Grebe feathers are supposed to be super-soft, as well as waterproof- perfectly adapted for their aquatic life. Little Grebes have an amazing lack of tail, but from watching them so closely I saw there is actually a single feather sticking out right at the back! It's not very big and isn't really visible in this photo. Does it have any use I wonder? Breeding plumage Little Grebes also have yellow patches on the sides of their beak, which I always thought before were feathers, but I realised they were actually patches of highly coloured bare skin, almost like a gape on a baby bird. It must be for displaying, as well as the lovely rusty cheeks. While this grebe was preening a tiny feather came out, and it ate it! Grebes apparently eat feathers to line their stomachs against sharp fishbones, and also feed them to their babies, so why waste a perfectly good part of your own plumage? 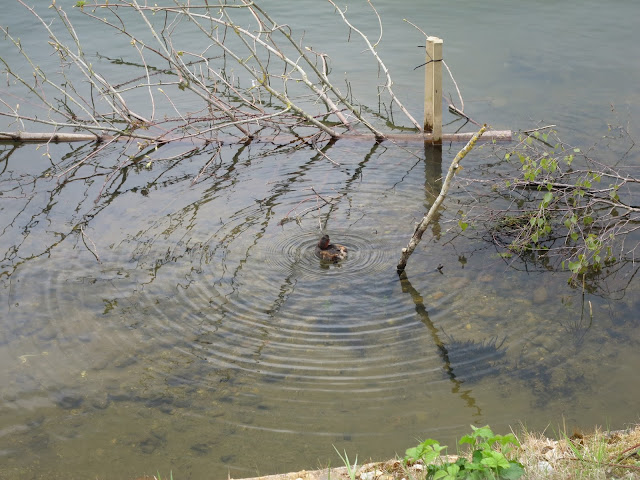 I love the way the ripples go in this photo! But here's a closeup of the grebe. 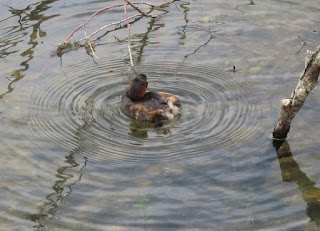 You can see how flat its back is. This came in handy for what happened next. The female sat on the nest, lowered her beak into the water and displayed her back to the male. We wondered what she was doing until the male swam over, climbed on top and mated with her. It was certainly easier for him to balance than for a lot of other species I've seen mating, and he was also advantaged by her total lack of tail, making it easier to perform the actual act. Earlier when I said it was the male who chased the ducklings, I was just guessing when I actually saw it but later it was confirmed when he was the bird who climbed on top.


I've been checking the Blashford blog but I haven't seen any updates on the nest. It's possible it didn't survive- there has been plenty of rain since the start of May, and all floating nests are vulnerable. Or maybe the nest did progress all the way to hatching but when the eggs hatched the parents took the babies away so they couldn't be viewed from the hide anymore. The Blashford lakes are absolutely huge and the Little Grebes are very tiny, and like many water birds they leave the nest straight away. I'd love to know either way if anyone from my area knows. I was just happy to be able to watch this amazing natural event, a nest I'd never seen before being built. There are lots of Little Grebes on the Itchen Navigation near where I live, but I've never seen a nest, or any chicks. We think they go somewhere on the surrounding water meadows where they aren't so exposed. I've never heard a pair call to each other before, either. Whenever I've seen a pair together outside the breeding season they were always silent. Maybe calling happens more in the breeding season, or just is needed more on larger bodies of water?


On the Blashford scrape there was also another pair getting ready for upcoming eggs! We saw one Redshank approach another, and begin raising his wings one at at time, accompanied by the Redshank's trademark loud calls. I can't remember where I heard this, but I think for some species of waders I think the white underwings are impressive to the female, and are flashed as a display? Though honestly I can't imagine how one set of white underwings can be different from another, maybe it's more the entire display with the calling and flapping as well. Anyway the female wasn't really paying attention to the male, though he didn't seem to read her disinterest very well and tried to jump on her back to mate with her. Unlike the Little Grebes, though, he had the disadvantage of long legs which made balancing on a bird that isn't that bothered whether you stay on a problem! He fell off without mating successfully.

Later, while in the woods around the lakes, we found something amazing in a patch of sand. It was the first Badger footprints I've ever seen! I've seen a few setts, and plenty of signs (rootling patches, dung, scratched trees and chewed roots, kill remains) but never their distinctive, wide pawprints. All the setts I've seen have been on dark chalky earth, and the Badgers turn over the soil frequently near the sett so it's hard to see their prints. But the small patch of sand we found was just enough to visibly show an area where a Badger had scuttled past the night before. The softness of the sand picked it up the detail in the pawmark perfectly. Though my photos aren't all that good and don't really show how distinctive these tracks were. 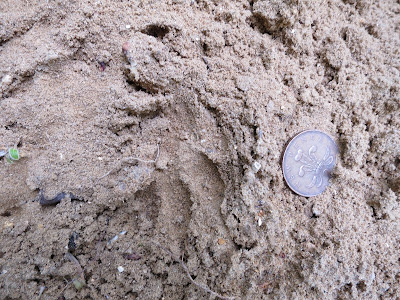 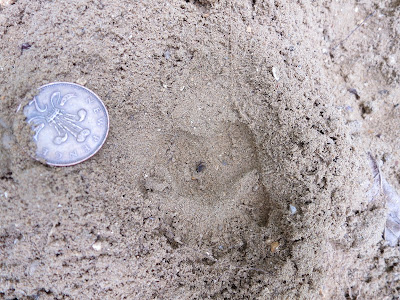 The last one shows the wide, often described as kidney-shaped, pad quite well. As you can see I used a 2p coin for size comparison, but I want to impress on you the importance of remembering to take the coin away afterwards! The day after my visit, this post appeared on the Blashford blog: https://blashfordlakes.wordpress.com/2015/05/02/the-early-birder-catches-the-bird/ The writer of this post found a set of Badger footprints too, in what sounds like exactly the same spot as mine, and he even found a handy 2p coin to photograph it with! Er....whoops. ^^ I could have sworn I took it with me, but I misremembered because this is clearly the same coin! Leaving random coins lying around in nature is not to be encouraged, so kids, remember to take your photographic scale aids with you! Or put them in the reserve collection box, as the writer did. Also you can see some lovely Little Grebe photos in that post.


Thanks for reading friends, and I hope the joys of Spring found you this year! :)
Posted by E at 21:04