Summer is a quiet time for birds. Though some are still feeding babies, the majority have finished and their babies are now independent, or at least don't require constant attention! The earliest returning migrants are definitely on their way out- I haven't seen a Swift since the Saturday of the ringing (and already miss their screaming calls as the soundtrack to my lunch hour). At this time of year most birds stop singing because there isn't the same urgent need to defend a territory. The adult birds start moulting and need to lay low for a while. Woodlands go quiet, as the birds even seem to be calling less at this time of year, and it's hard to find them in the fully leafed trees. Estuaries are still nowhere near migration season so there's not that much to see, and all the ducks are in eclipse so things are much less colourful than usual. Some species, like Skylarks, seem to disappear altogether at this time of year, only to reappear in the autumn.


I've heard this season called the birding doldrums, and that seems to fit it pretty well. In the UK a lot of birdwatchers start watching butterflies in this season because while the birds are quiet, butterflies (while also quiet, by nature ^^) are springing out everywhere and fill the niche of something to watch. I haven't been able to watch butterflies that much this year but in the past few years I've been occupied every summer trying to find the speciality butterflies of Hampshire. But that's not what I'm talking about today (maybe another time?), these are my top five favourite butterflies that I see every year, and never get tired of seeing. Seeing the first one of these butterflies every year makes me so happy, and I always wish they could be around all year.


Orange Tip
This is one of our most simply patterned butterflies, and yet one of the most beautiful. Only the male is colourful, and he is white with huge, bright splashes of orange on the top of each set of wings. It's a colour you have to see to believe! These butterflies are unmistakable. Even the female can be told with a good look as she has green mottling on her underwing, which the other white butterflies don't have. A few butterflies will show up while its really still winter (Red Admirals as they hibernate and will come out on sunny days, for example), but the Orange Tip is a true sign of spring. I always miss them when they are gone, by early summer.


Marbled White
Not colourful like the Orange Tip, but intricately patterned, this one I remember seeing for the first time on some chalk grassland on a Wildlife Watch walk when I was about eight. I fell in love with it straight away. I know it's not a chalk grassland specialist (unlike the other special butterfly we saw that day, the Chalkhill Blue) but I always associate it with special butterfly habitats, even though in reality it can turn up all kinds of places, even the school playing field when I was kid! I see them on my local patch too, but nothing beats the chalk grassland Marbled Whites for sheer numbers. Sometimes you go when there's clearly just been a hatching and you can barely move for Marbled Whites! Fantastic things.


Silver-Washed Fritillary
Another one that feels special to my locality (Hampshire), and this one really is not all that widespread and I'm lucky to live in an area where you can easily see them. It's a size larger than most common butterflies, and in books it doesn't look that distinctive from the other fritillary species, which are mostly orange withn black squiggles. The distinctive thing about this butterfly is they way it flies in a strange slow and floaty way, especially later in its season. It's great for getting good views, and distinguishes it from the other common-ish fritillary around here, the Dark Green Fritillary, which is very fast flying and is practically impossible to spot at rest. The Silver-Washed is slow to the point that it will sometimes even land on people! I've had them land on my shoes as I was walking through Crab Wood (the fungi place, and one of my most reliable sites for them). Although they like mature woodland they are also wanderers, and we've even had them turn up in our garden, a long way away from any of their local strongholds! Here's a photo I took a few years ago of one resting on a man's arm: 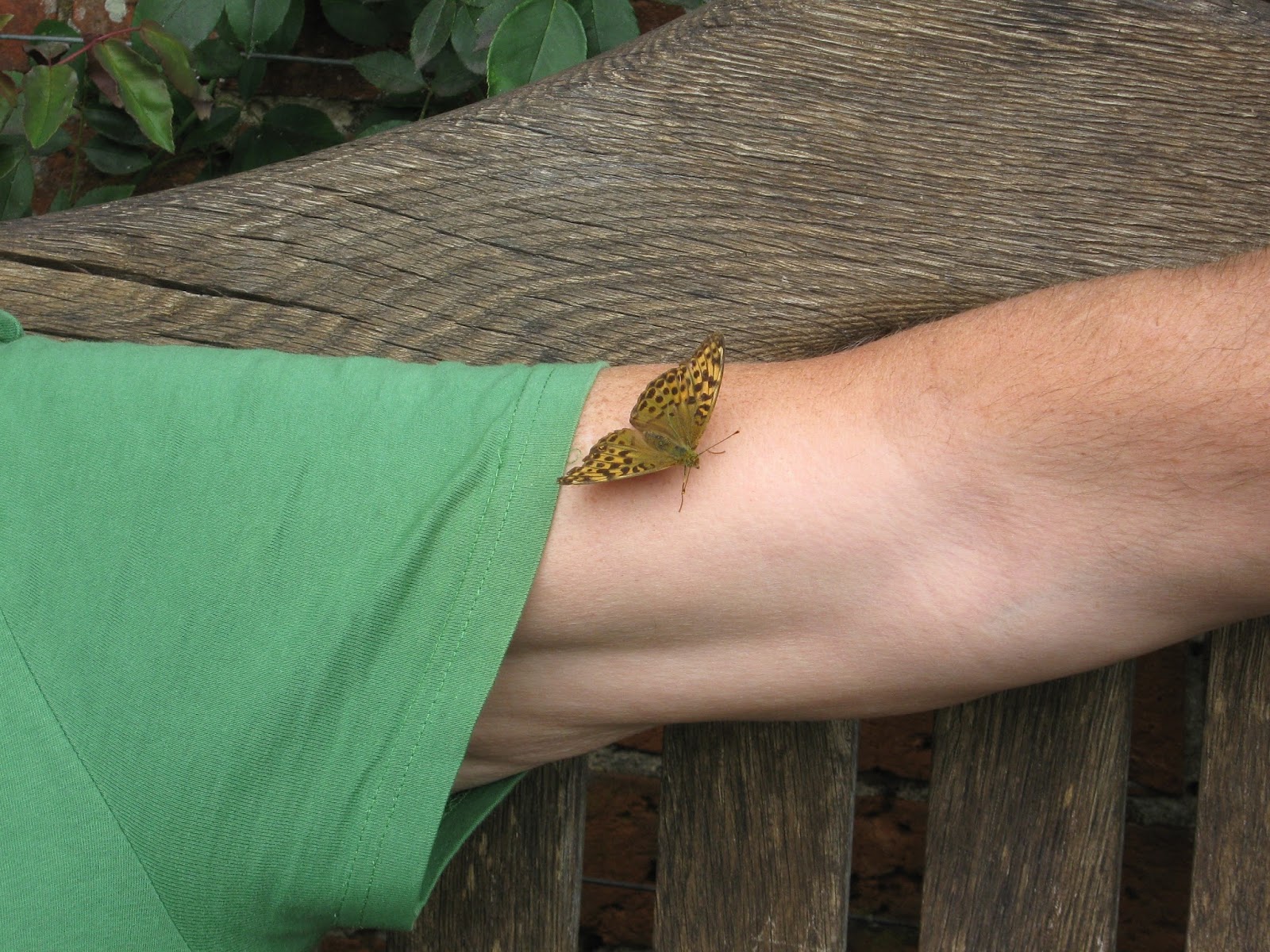 Ringlet
A common grassland butterfly, that is distinguished from other brown butterflies like the Meadow Brown and Gatekeeper in that it never has any orange on it. It is dark coloured on its upperwings, and a good view will show a thin white line all around the outside of the wing. But the really beautiful thing is its underwings, which have several classic butterfly eye-markings on them, each with the teeniest white dot in the middle like someone has painted it with a brush. They like to sit still with their wings closed to show off these eyes. The Ringlet could not be considered colourful but it is special to look at nonetheless! And it has a beautiful name.


Clouded Yellow
This is the only one I've talked about where I may well not see it in a particular year, no matter how many good butterfly sites I go to. You can't try to find a Clouded Yellow, and because they are migrants from the continent, some years are very good for them while others are bad (it used to be that even numbered years were good and odd numbers bad, but seeing as 2013 was a relatively good year in my experience maybe it's broken its streak). When you see one you'll know it, as no other butterfly has such a deep, beautiful yellow shade. The Brimstone, which is the other yellow butterfly and is much commoner, is a much more lemoney yellow. The Clouded Yellow is also special because it turns up right at the end of August and throughout September, when the seasons for a lot of butterflies are over until next year, so it reminds you that the butterfly year isn't quite over yet. And you can see them anywhere- on somebody's flowering garden bush, or in farmland margins or at the coast. They are restless and rarely land, and when they do they will rarely ever open their wings. I've never seen this and have only seen photos as proof that it actually happens! But when they are flying their colour is so distinctive, and so different from any other butterfly in the UK, that you will know immediately that you're seeing a Clouded Yellow.


I'd love to hear about other people's favourite butterflies, whether UK or in other countries, so please do comment and tell me all about them! I'm now off to Norfolk for a week on a family holiday, and you know what that means- BIRDS!! My mum and I can't wait to go to Cley and Titchwell; even if it isn't migration season and even if the Birding Doldrums aren't over yet, that doesn't matter to us. I'll write all about it when I get back! And, fingers crossed, I'll get some sketching done too. :D
Posted by E at 23:21