Recording signs of mammals for the National Mammal Atlas

Note: This post contains photos of dead animals and poo. Just a heads up in case you're eating your dinner!

At the start of this month I was in Wales, and when I came back I was determined to write about the wildlife...but I have epic writer's block on that post. So to try and shift it, here's a post about looking for mammals!

Recently I became aware of the National Mammal Atlas, a project by the Mammal Society to try and map the distribution of every British mammal species, and being someone who loves recording records online (I already submit to Birdtrack, BTO's garden bird count, goingbirding.co.uk, and seasonal counts such as the Big Garden Birdwatch and the Big Butterfly Count) I was very interested in the project. They want every single record, from rare species to common ones like Rabbit, Brown Rat and Grey Squirrel. As well as reports of living mammals they accept reports of dead animals, meaning roadkill can be a useful record, and they want records of signs of mammals, such as burrows, droppings, footprints or mole hills. As a birdwatcher I sometimes see mammals, but if I'm lucky I might see two species in one trip. So I decided to go on a walk and see how many signs of animals I could find.

Since the weather has been gorgeous recently I decided to go to a good place for butterflies, Stockbridge Down, and sure enough the place was alive with them: Meadow Brown, Gatekeeper, the lovely Marbled White, the tiny Small Heath and the cute, bright orange Small Skipper. Best of all was the large, lurid orange fast-flying Dark Green Fritillary. The Down is also fantastic for birds, and though it's getting to a quiet time of year for songbirds there was still plenty to see, including a male Blackcap popping in and out a tree with beakfuls of food, a blindingly yellow male Yellowhammer singing from the top of a bush, and a flock of 5 or 6 Mistle Thrushes (maybe a family?) flying by.

But what about the mammals? By the time I arrived at the Down I unfortunately already had records for two species from the drive over. I say unfortunately because of course they were roadkill: a Grey Squirrel about halfway through the journey, and rather heartbreakingly, a Badger, very close to the entrance to the Down. I've never seen a living Badger before (though I have found signs of them) and I hate seeing them dead on the roads. Then I had barely stepped through the gate of the nature reserve before I found a third mammal, a Common Shrew. This is another animal I've never seen alive, despite it being incredibly common in Britain; I expect it's probably nocturnal like a lot of small rodents. This, of course, is why records of dead animals are useful to the Mammal Society- otherwise they'd end up with far more comprehensive records for diurnal animals than nocturnal animals. Anyway, here's a picture of the Shrew. 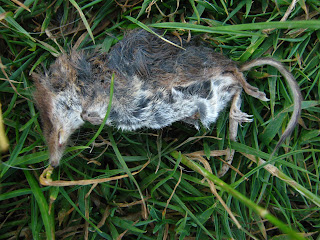 Poor little thing. Ask anyone: I have a soft spot for small furry creatures. ^^ You can tell this is a shrew by its very pointy nose (unlike the rounded nose of a vole) and its hairy tail (unlike the bald tail of a mouse) that is short compared with the body. Finally, the teeth of a shrew are tipped with red, as you can see in this close-up: 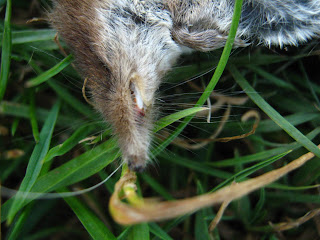 I would love to find out why the teeth are red, so if anyone knows, let me know.

As for how I know this is a Common Shrew and not one of the other kinds, I confess it was mostly process of elimination: the Common Shrew is far more numerous and therefore it is most likely to be one. The fur colour (warm brown rather than dark grey) and size (about the size of a mouse rather than smaller) also helped me come to this conclusion.

How it died is a bit of a mystery to me, as being killed by a predator would seem the most likely cause of death, but why would the predator then leave its kill? But then on the Mammal Society information page on Common Shrews, I found this: 'They are often found abandoned by the predator..since a liquid produced from glands on the skin is foul tasting.' So that seemed plausible. And in the first photo you can see what looks like it might be the fatal wound, on the back of the Shrew's neck, which is where a predator would bite to kill its prey.

As I continued my walk, I found mole hills, and burrows covered with rabbit droppings, as well as the only living mammal I saw on my walk: a lone, alert-looking rabbit! Rabbit droppings are easy to identify, but later on I found some poo that caused a bit more confusion. 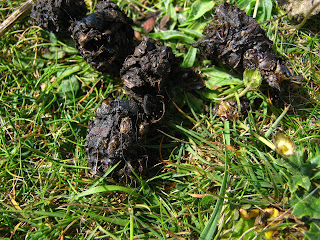 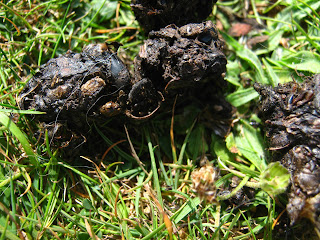 As you can hopefully see in the close-up, these droppings are packed with beetle shells, which made me think 'Badger!' straight away. The reason for that is I remember when I was a Wildlife Explore (young RSPB member) we found some poo like that on a field trip, and the leaders said it was Badger poo. I did a little research all the same, and then began to be unsure, because I found out that Badgers make latrines near their setts and that's where most of their dung will go. This was found out on the grass, not in a latrine and nowhere near a sett, so I started to look for suggestions for alternative possibilities online. It seems that beetle shells can be found in Hedgehog dung, but to rule that one out size is the main factor, and though I didn't measure the droppings (must bring a ruler next time!) compared with the size of a Hedgehog, I think they were far too big. Domestic dog can be ruled out immediately because the poo didn't smell, and dogs don't tend to eat loads of beetles. Same with sheep, which do graze on part of the Down, but they certainly don't eat beetles. Fox poo can also be ruled out because that has a peppery, pungent smell (I've had the dubious pleasure of finding Fox poo before) which this didn't have at all.

So for a while I was unsure about what I had found here, until I noticed something else which you should be able to see in the close-up: there's some long, white hairs stuck to the droppings! I'm almost sure they are Badger hairs, and I already know Badgers are in the area (thanks to my sad find near the entrance of the reserve earlier) so I've reported this to the Mammal Atlas as a field sign of Badgers. Just in case, though, I've attached a photo so the record can be checked. I did the same for the Common Shrew, though not for the mole hills or dead squirrel, those are pretty easy even for a mammal novice such as myself. ^^

The best thing about trying this experiment out was realising how much I might normally miss: if I wasn't thinking about looking for mammals, I might not even have noticed the shrew or the Badger droppings, or the mole hills, which even though they are a common sight, are a sure sign that an animal barely anyone ever sees is present in the area! So, although I only saw that one Rabbit, I also found Badger, Mole and Common Shrew, as well as that squirrel on the journey, and therefore had 5 species to submit to the Atlas. And I learned some new things about Common Shrew and Badgers!

To anyone who wants to submit your own results, follow this link: http://www.mammal.org.uk/ and go to 'submit records' on the left. You can submit any mammals you have seen in Britain since 2000, as long as you know the date and the location you saw it, which you pinpoint on a map. When doing this, it helped me to remember whereabouts the animal was found in relation to a landmark: for example, the dead squirrel was on the road near the entrance to Sparsholt College, so that made it easier to find on the map. At some point I want to go back and submit some mammals I've seen in the past.

Hopefully Wales post will be up next! Because I really did see some awesome things there...
Posted by E at 22:31